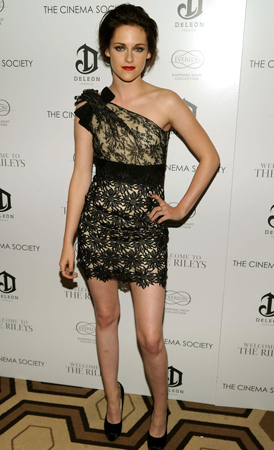 With Breaking Dawn underway, Kristen Stewart is starting on a somewhat timid diet. I'll admit that it's a little odd to me — sort of like when I found out that the Gossip Girls use Spanx.

With a naturally lean frame and youth working in her favor, Kristen doesn't strike me as the dieting type. Welcome to the Rileys director Jake Scott tells People that while filming WTTR, Kristen sort of let things go on set: "She ate badly, smoked tons of cigarettes, stayed up late. She embraced the habitual nature of the character." Now that she's back to being Bella, the actress is trying to make things a little healthier, starting with a lighter diet: "Well, it’s kind of embarrassing but I’m playing a vampire soon. I eat disgustingly normally. And so, right now, I’m trying to not put so much butter in my food and stuff like that."

How about you: have you ever (reluctantly) changed your diet or health habits for a big event?