Working a nine-to-fiver is mandatory for most people, and unfortunately, a long commute often comes with the territory. According to a study published today in the American Journal of Preventive Medicine, those who travel 16 or more miles each way weigh more and have higher blood pressures than those with less than 10-mile commutes. 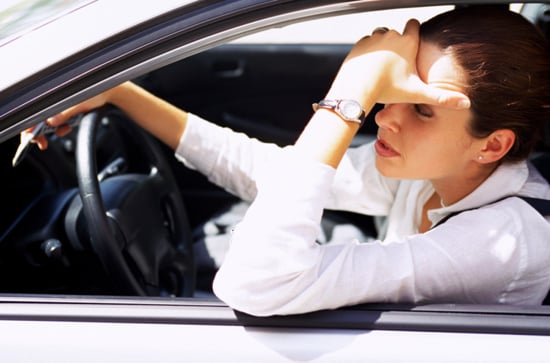 Of the almost 4,300 residents from Dallas and Austin involved in the study, researchers discovered that for every 10-mile increase in driving distance, the commuter's BMI (body mass index) rose .17 units. People with lengthy commutes are nine percent more likely to be obese, either because they didn't exercise as much, are eating fast food while driving, or they're not getting enough sleep because their long commute forces them to wake up early.

Weight isn't the only thing affected by a long drive to work. Spending that much time in the car, especially stuck in traffic, also makes a person tired, moody, and stressed out, which is one reason 52 percent of those in the study with a longer commute suffered from high blood pressure.

So what's a commuter to do? Quitting your job is obviously not an option, and if working at home part-time isn't feasible and neither is finding a job closer to where you live, keep reading to learn what commuters can do to avoid weight gain and other health issues.