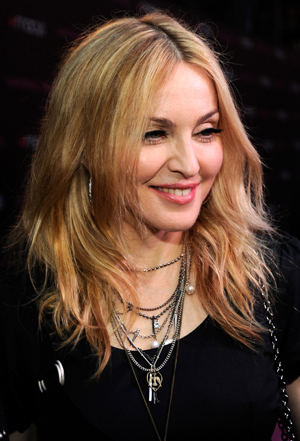 It looks like Madonna is taking her commitment to fitness all the way to the bank. Next month, the pop star is opening the first of 11 Hard Candy Fitness centers. The first Hard Candy will open in the posh Bosque de las Lomas neighborhood of Mexico City on Nov. 29.

She's not going it alone though. The pop star's partners in this venture are her manager Guy Oseary and New Evolution Ventures. In a statement, Mark Mastrov, chairman of New Evolution and the founder of 24 Hour Fitness, says that "Hard Candy Fitness will be a reflection of Madonna's point of view and will reflect her input on every detail including music space, light, and other design cues."

So far, Madonna's centers are planned for cities in Russia, Brazil, Argentina, Europe, and Asia. Sadly, the United States is not getting any love. Members can expect classes like Zumba, Latin moves, and cardio kickboxing, and also a bike studio, "Mind Body" studio, and climbing wall. The centers will feature top line machines, a juice bar and cafe, and sauna and steam room.

Celebrity Instagrams
Adrienne Bailon and Israel Houghton Welcome a Baby Boy: "He Is Worth Every Tear"
by Eden Arielle Gordon 15 hours ago

Celebrity News
Florence Pugh Confirms Split From Zach Braff, Says She Gets "a Lumpy Throat When I Talk About It"
by Lindsay Kimble 19 hours ago

Celebrity News
Anne Heche's Upcoming Movies and TV Shows, From "The Idol" to "Girl in Room 13"
by Eden Arielle Gordon 2 days ago