It turns out that although smoking a doobie on your front porch may be illegal, it might not be as bad for your lungs as previously thought. A recent study on marijuana users — and the largest study on this population every conducted — found that even though pot smokers tend to inhale deeply and hold the smoke in for as long as they can handle before coughing uncontrollably exhaling, periodically smoking pot doesn't negatively affect lung function. 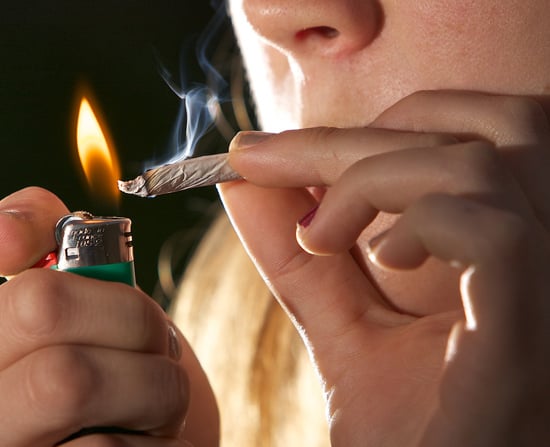 The study followed 5,100 men and women over two decades, and whether smoking one joint a day for seven years or once a week for 20 years, lung capacity didn't deteriorate. In fact, some who smoked regularly had slightly improved lung function.

This is by no means a green light to light up the green. Aside from being illegal in most places, those who blaze up suffer from mental health problems twice as much as nonusers. There's also the risk of lung cancer, plus cannabis-induced mental fogginess and impaired coordination could lead to accidents, job loss, and other social implications. Chronic bronchitis and other respiratory problems are also a major risk for marijuana smokers, as well as issues in the bedroom — men that smoked pot daily were four times more likely to have trouble reaching orgasm. Toking also increases your heart rate, which can up your risk of a heart attack.

Like alcohol, smoking pot is considered a rite of passage for many young adults. Although its addiction rate isn't as high as that of nicotine or heroine, many get hooked on the instant feeling of calm that goes along with lighting up, and aren't worried about the possible health risks. Hopefully, this study doesn't give people more reason to toke up.

Any cannabis products referenced above are not intended to diagnose, treat, cure, or prevent any disease. The writer is not a medical doctor, and their experience is based on personal use, the results of which may not be typical or intended. The legality of cannabis products varies by state, and readers are encouraged to check their local laws before purchasing and using cannabis products. Nothing in this article should be construed as advice regarding the legal status of cannabis products. Any views expressed in this article by a third-party sponsor are those of such sponsor, and do not necessarily represent the views of POPSUGAR.
Health NewsHealthy LivingMarijuana

Healthy Living
This Vegan Chef Singing About Pizzadillas and Churros Makes Me Want to Get in the Kitchen!
by Jenny Sugar 12 hours ago

Product Reviews
I Finally Found a Weighted Blanket That's Cozy, Relaxing, and Even Stylish
by Krista Jones 15 hours ago

Healthy Living
If Your Mind Won't Shut Off at Night, This New Sleep App Will Help You Relax and Sleep Better
by Tamara Pridgett 1 day ago