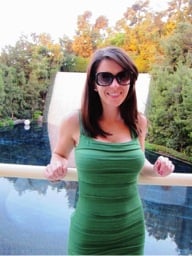 Hi, my name is Tina Haupert. I'm the blogger behind Carrots 'N' Cake and the author of Carrots 'N' Cake: Healthy Living One Carrot and Cupcake at a Time. I'm 32 years old and live on the South Shore of Massachusetts with my husband, Mal, and my adorable pug, Murphy. I love all things related to fitness and my favorite way to stay in shape is CrossFit. I just started taking classes this past December, but I am already hooked! I'm a Fitfluential Ambassador and my work has been featured in a number of national publications, including Health, Shape, Fitness, Boston Globe, People StyleWatch, Women's Day, Prevention, and Glamour. I'm also a weekly contributor to Health magazine's News & Views, and you can find me on Twitter and Pinterest.

Never heard of Julie Foucher? She's the women's runner-up of the 2012 CrossFit Games, which means she's the second "Fittest Woman on Earth." I actually had the chance to meet Julie at the 2012 CrossFit Games afterparty, and she was everything I expected and more. She was kind, humble, and sweet, and definitely a role model for female athletes everywhere. Julie works hard in every aspect of her life, and seeing this motivates me to become a better version of myself. Here are three reasons why Julie Foucher inspires me.

Keep reading for more tips on CrossFit and using Pinspiration for fitness.

She's humble.
Foucher's popularity as a CrossFit athlete has soared over the past couple years because of her impressive performance at the CrossFit Games. (She took fifth place in both the 2010 and 2011 CrossFit Games and second place in the 2012 Games.) Julie can deadlift 300 pounds, back squat 235 pounds, and clean and jerk 185 pounds, which is amazing, but you'll never hear her brag about it. She's actually been dubbed "the silent beast" for her humble demeanor and killer athletic ability.

She's dedicated — both inside and outside of the gym.
When she's not training for Crossfit, Foucher is studying hard in medical school. That's right, she's a full-time student and spends most of her days devoted to the profession, but she still manages to balance a tough CrossFit training schedule. Additionally, Julie is dedicated to her diet. (She recently converted to a Paleo diet in January.) In a recent interview, she told CrossFit.com that she prepares a week's worth of food so she always has a healthy option available to her. She also rarely strays from her Paleo diet. "Saturday I usually have a taste," she says. "Like something with chocolate and cream in my coffee. Not an entire day of cheating, just a taste to keep me sane." Now if that doesn't say dedication, I don't know what does!

She's small, but strong as hell.
It's no secret that Foucher has a great physique, and at 5'4" and 130 pounds, she's an inspiration to women everywhere for being strong, not skinny. On the final day of the 2012 CrossFit Games, Julie wore a CrossFit Racerback Bra with CrossFit Board Shorts to compete, for functional reasons, of course, but she looked so incredibly fit, which was inspiring to see. In fact, thanks to Reebok, I now own both of these items and absolutely love them. They're both really comfortable and don't ride up or shift during my workouts. And, OK, I sort of feel like Julie Foucher when I wear them.

I recently created a Pinterest board called "My Fit Pinspiration" with a bunch of photos of Julie and other athletes, images, and gear that inspire my CrossFit lifestyle and keep me motivated. Reebok is holding a contest right now where you can build your own "Fit Pinspiration" board for a chance to win a girls' weekend in New York City for two. Click here for more details!