Our friends at Health share what you really need to know about those frustrating dimples, and how to get rid of cellulite. 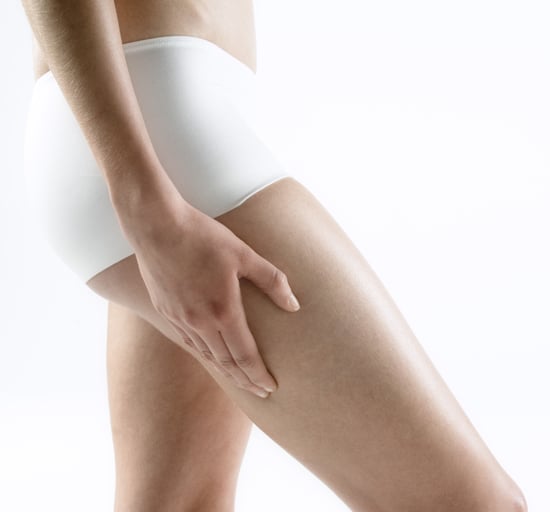 Got cellulite? You're not alone: the cosmetic condition affects nearly 90 percent of women at some point during their lives, even women who are otherwise slender and fit.

As common as cellulite is, there's also an awful lot of misinformation out there about what it is, what causes it, and how to get rid of it. So before placing blame, scheduling a cosmetic procedure, or spending a fortune on over-the-counter products, read up on the real story behind cellulite.

Women Get More Cellulite Than Men

Fact: Women tend to carry more fat around their hips and thighs. We also have less supportive connective tissue to keep it all in place. "If you think of a scaffolding outside a building that has those X crosses on them, that is sort of what men's fat chambers have," says David McDaniel, MD, director of the Institute for Anti-Aging and assistant professor of clinical dermatology at Eastern Virginia Medical School. It is estimated, however, that about 10 percent of men suffer from cellulite, as well.

Cellulite Gets Worse With Age

Fact: Hormones also seem to play a role in the appearance of cellulite; as women age, their bodies produce less estrogen — a hormone that helps keep blood vessels flowing smoothly. Less estrogen can mean poorer circulation, which can also mean a decrease in new collagen production and the breakdown of older connective tissue.

Cellulite May Be in Your Genes

Fact: It's true that cellulite runs in families; if your mother and grandmother had cellulite, you have a better chance of also developing it. In fact, there's even a genetic test on the market that can tell you whether you have a gene variant that puts you at higher risk for moderate to severe cellulite — but, considering that most women will develop cellulite in their lifetimes (and the fact that you'll know it when you see it), it's not exactly worth its hefty price tag. If you're not one of the lucky ones with smooth-skinned relatives, take heart: genetics is only one small part of the cellulite puzzle; factors like diet, exercise, and maintaining a healthy weight also play a role.

Cellulite Only Happens to Out-of-Shape People

Myth: Being overweight does make the appearance of cellulite more noticeable; the more fat you have underneath your skin, the more it's likely to put stress on your connective tissue and bulge out of its weak spots. But cellulite also happens to women of all shapes and sizes, says Shira Ein-Dor, owner of the American Cellulite Reduction Center in New York City. "I even treat Victoria's Secret models," she says. "They're very lean, they work out and eat well, they do everything right but they still have cellulite."

Exercise Can Reduce the Appearance of Cellulite

Fact: A regular exercise practice cannot cure cellulite — but in many cases it can help prevent or reduce its appearance. Cellulite occurs when connective fibers underneath the skin become weak or lose their elasticity, but stretching and strengthening those areas (in addition to burning away excess fat overall) can help. "Firming and toning those muscles will in turn tighten the skin, giving the illusion that cellulite is less noticeable," says McDaniel. Yoga routines that target the butt and thighs can help, as well as strength-training moves that build muscle and boost circulation.

Myth: Running or other forms of

Myth: Despite what you might read on their labels, no topical creams — prescription or over-the-counter — have been shown to permanently reduce the appearance of cellulite. Studies have found, however, that products containing retinoids (labeled as retinol over-the-counter) may provide some temporary effects by creating a thicker skin cover that can help camouflage bumps. There is limited evidence that creams or scrubs with stimulant ingredients, like caffeine, ginger, and green or black tea, may also help by improving circulation and breaking down fat-cell stores, but they are less proven. "Mostly I think if these topical creams work — and I think most probably do little or nothing — they are more likely to help with slimming and body contouring, which is not the same as cellulite," says McDaniel.

Skin Fillers Can Even Out Dimply Skin

Fact: Injectable dermal fillers like Restylane and Radiesse, used primarily to plump up sagging cheekbones and remove facial wrinkles, have also shown to be beneficial — at least temporarily — for cellulite-plagued sections of skin. "It's like putting icing on a lumpy cake to make it look better," says Karcher. "Especially if someone is really skinny and they have a few really deep divots, a filler can plump that up and even it out really well. However, the procedure can cost hundreds or even thousands of dollars per leg, she adds, and the results tend to only last a few months.

Fact: Laser, radio-frequency, and massage techniques have been used for several years to reduce the appearance of cellulite — and while their results are not permanent, they are effective in the short-term, says Karcher. "These are going to work better than some drug-store cream, and they can be worth it if you have the time and the money to spend on them." Some (like TriActiv and VelaSmooth laser treatments) require 10 to 15 sessions to significantly improve appearance, and require monthly maintenance appointments. Others (like the radio-frequency treatment Thermage CL) are more expensive but results seem to last six months to a year.

Read on for more myths and facts about cellulite.

Liposuction Will Make Your Legs (or Arms, or Tummy) Look Better

Myth: If cellulite is your problem, liposuction should not be your solution, says McDaniel. In fact, the cosmetic procedure could even make fat distribution more uneven, making its outward appearance even worse. Another vacuum-like (but non-surgical) procedure, however, known as Endermologie, has been shown to help. During Endermologie, a technician runs a suctioning device surrounded by rollers over a patient's skin, pulling and squeezing trouble spots for about 30 minutes. camouflage bumps are visible after about 10 visits (two per week), which can cost between $80 and $150 each.

Fact: Your diet alone can't determine whether you will or will not get cellulite, but eating a well-balanced, plant-heavy diet can reduce inflammation throughout your body and help you maintain a healthy weight, says McDaniel. Staying hydrated — both by drinking water and by eating plenty of foods with high water content — will also keep your connective tissue strong and supple, and may even help you slim down. Aim to eat more cucumbers, radishes, tomatoes, and bell peppers, which (along with many other fruits and veggies) are all more than 90 percent water.

Only a Dermatologist Should Perform Cellulite Treatments

Myth: A skin doc is a good place to start, and many dermatologists do perform treatments in their clinics. But cellulite is not a medical condition, says Ein-Dor, and a medical professional is not required to treat it. "I am not a doctor, but because I focus only on cellulite, I can provide many more options in my center than most doctors can provide in their offices," she says. Medispas can also perform treatments such as Endermologie and non-invasive laser procedures — but Ein-Dor cautions that you make sure your technician is licensed and has received proper training on whatever device you choose. (If you want a surgical procedure like Cellulaze, however, you'll need to see a dermatologist or cosmetic surgeon.)

The Clothing You Wear Can Make an Impact

Myth: Yes, wearing compression-style leggings while you exercise can reduce thigh jiggle as you move — but it's only a temporary effect, says Karcher, and you're unlikely to see any change after you strip down post-workout. "For any clothing that claims to actually have lasting results, it's just a marketing gimmick and it's not true," she adds. In fact, for some tight clothes, the opposite may be true. Elastic bands on underwear, for example, can actually contribute to the appearance of cellulite if they cut off circulation and limit blood flow.

Smoking Can Affect the Appearance of Cellulite

Fact: Cigarette smoke has been shown to reduce blood vessel flow and to weaken and disrupt the formation of collagen, allowing for the connective tissue to become stretched and damaged more easily and for underlying fat to show through. Plus, smoking can make you look bad (literally) in lots of other ways, as well. It causes premature wrinkles and aging, leaves skin dry and discolored and can contribute to stretch marks, to name a few.

Fact: This one's not exactly true or false, but scientists do seem to be getting better and better at finding long-term solutions for treating trouble spots. The most recent and promising procedure is a surgery called Cellulaze, approved by the FDA in 2012, in which an optic laser melts fat, breaks up fibrous connective tissue and stimulates the growth of new collagen, all through a pinhole-sized incision in the skin. "It's great because it works on both those fibers that are pulling down your skin and on the fat globules that are popping through," says Karcher. Recovery is quick, too: "you might be a little bit sore afterward, but you can have it done on a Friday and be back to work by Monday." The treatment starts at about $3,500 per leg, but results seem to last at least a year or two.

Healthy Living
Looking For the Perfect Jalapeño Marg? Try This Low-Sugar Recipe That's Only 200 Calories.
by Christina Stiehl 12 hours ago