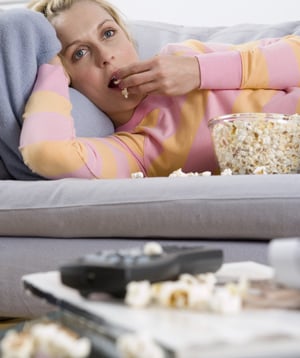 A new study from the American Journal of Preventive Medicine is pretty disheartening: only five percent of American adults do some sort of physical activity on any given day. Nearly 80,000 American adults, age 20 and older, were surveyed over a four-year period in a national telephone poll. The survey was pretty simple; participants were asked to share the details of the prior 24 hours, and the results indicate that most American adults aren't getting up that much.

The most dominant activities that the participants reported were eating and drinking (95.6 percent) and watching TV (80.1 percent) — hopefully not together! And while light activities like home maintenance fared OK (around 20 percent), vigorous activity like hitting the gym or going for a run wasn't really happening amongst the 80,000 participants. I'm hoping that they caught most of the 80,000 participants on a rest day, but with the nation's obesity problem on the rise, my gut says this may be more accurate than not. Where do you fall in this poll?

Healthy Living
Around The Web

Healthy Living
I Tried This Sugar-Free Simple Syrup, and It's Now a Staple in My Coffee and Cocktails
by Christina Stiehl 10 hours ago

Healthy Living
Remember When Kim Kardashian Claimed She Can Smell Cavities? Well, Here’s the Truth
by Lauren Pardee 20 hours ago