Paul Mason made headlines in 2010 after the TLC special World's Fattest Man but is now back in the news for continuing his weight-loss journey after already losing over 600 pounds. The 54-year-old man from England underwent gastric bypass surgery at 980 pounds in 2010, but even at his postsurgery weight, Paul felt physically limited by his excess skin. That's why a skin-removal surgery was so important to him, and after years of hoping, that surgery finally happened.*

*Warning: this post contains a graphic image of Paul's skin during surgery. 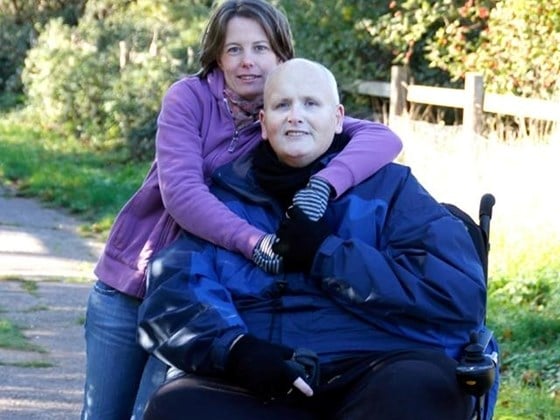 The reason Paul's surgery has been widely circulated on the Internet? The New York Times reporter Sarah Lyall was assigned to witness and live tweet the surgery from the operating room at Lenox Hill Hospital in New York. You can follow the process and view more photos there, but one of Sarah's photos, shown below, is of doctors holding some of Paul's excess skin during the operation.

Paul's long-awaited surgery will help him continue to turn his life around and be as active as possible as he works toward his goal weight of 200 pounds. "I'll be glad to take my dog for a walk down the road. I want to start looking for a job and get on with life," Paul told BBC News. The life-changing surgery would not have been possible without Rebecca Mountain, a woman who met Paul online in 2012 — and is now his fiancée. Paul moved from his home in England to be with Rebecca in Orange, MA, and Rebecca raised nearly $5,000 on a fundraising page dedicated to helping "Paul complete his extraordinary journey."

Paul's fiancée has been updating the public about Paul's surgery and recovery through his Facebook page. "The surgery was a success!" she happily shared earlier this week. To help offset the cost of recovery, the couple are accepting donations through Paul's YouCaring fundraising page.

Paul wants to use his experiences to help spread awareness about living a healthy life, no matter when you start. As stated on his website, "Paul is reaching out to those who are struggling with obesity and emotional addiction to food . . . with a desire to change, anyone can turn their life around."