A strict vegetarian or vegan lifestyle isn't for everyone, but we can all benefit from eating less red meat. What's so bad about a few burgers, steaks, and bacon breakfasts, you ask? A lot, actually. Read on to find out why you shouldn't eat so much red meat. 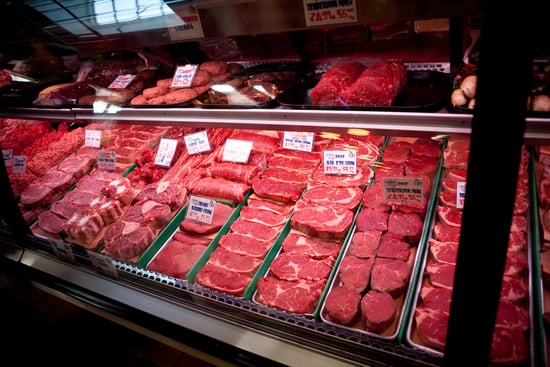 You'll live longer: The number one reason to limit your red meat intake — you'll live longer. Studies have shown that regularly eating red and processed meats increases your risk of developing heart disease and cancer, in part because of the high saturated fat and cholesterol content. The newest study, released this week in the Archives of Internal Medicine, is the first to link the amount of red meat you eat to your actual risk of death. It found that replacing just one red meat dish a day with a healthier protein choice like fish, legumes, or poultry reduces your risk of dying early by seven to 19 percent.

More reasons to lay off the red meat after the break.

You'll eat more nutritious foods: When meat's the star, side dishes can be a mere afterthought. But when you're not highlighting a big, sizzling, juicy steak, you may find that you reach for more nutritious foods instead. Besides all those healthy vegetable-based sides, choosing a healthier meat, like seafood or poultry, can help your body get the nutrients it needs. A recent study, for example, found that eating fish helps protect your brain from aging.

It's better for the environment: Red meat isn't the only culprit when it comes to the detrimental effects your diet can have on the environment. In general, cutting back on all your meat consumption can have a marked effect on our ecosystem, since meat production requires a large amount of energy, food, and water resources. Not only that, but reducing your overall meat consumption can make shopping for local, pasture-raised meat — which has far less of an effect on the environment but can be expensive — more affordable.

So how much is too much when it comes to red meat? Experts recommend you lay off the processed meats as much as possible, since products like bacon and sausage are linked to the highest risk of premature death (20 percent, according to the newest study). In general, try limiting the amount of red meat you eat in a week to only two or three servings (lean cuts are best). Or you can try going semivegetarian, or flexitarian, by making sure the majority of your meals are vegetarian. This will allow you to enjoy the benefits of a mostly plant-based diet while still being able to have the occasional meat-filled dish.