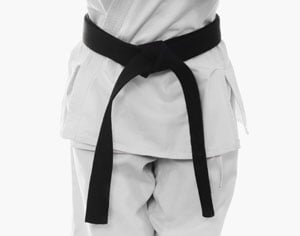 I know there are days when you don't feel motivated to work out, but this story is sure to get you off your couch. Sheila Radziewicz began training in martial arts three years ago, and next month she's testing to earn a black belt in tae kwon do. A feat unto itself, but Sheila is doing it essentially without arms. She has a rare genetic disorder known as thrombocytopenia absent radius, or TAR syndrome. Characterized by the absence of the radius bone in the forearm, the severity of this genetic condition varies among people with the syndrome. Sheila's arms formed such that her hands are near her shoulders. With TAR syndrome, it's common to have other structural malformations, and the soon-to-be black belt was also born without kneecaps.

Sheila never let her disability stop her from doing anything. Sheila says, "I grew up with the phrase, 'The impossible only takes a little longer.'" The 32-year-old was told she wouldn't survive; then told she wouldn't walk. Now, despite her condition, her tae kwon do instructor explains, "She can use nunchucks and break boards with her kicks." With determination and a can-do attitude, you can accomplish many goals that seem beyond you. I love her mantra too!