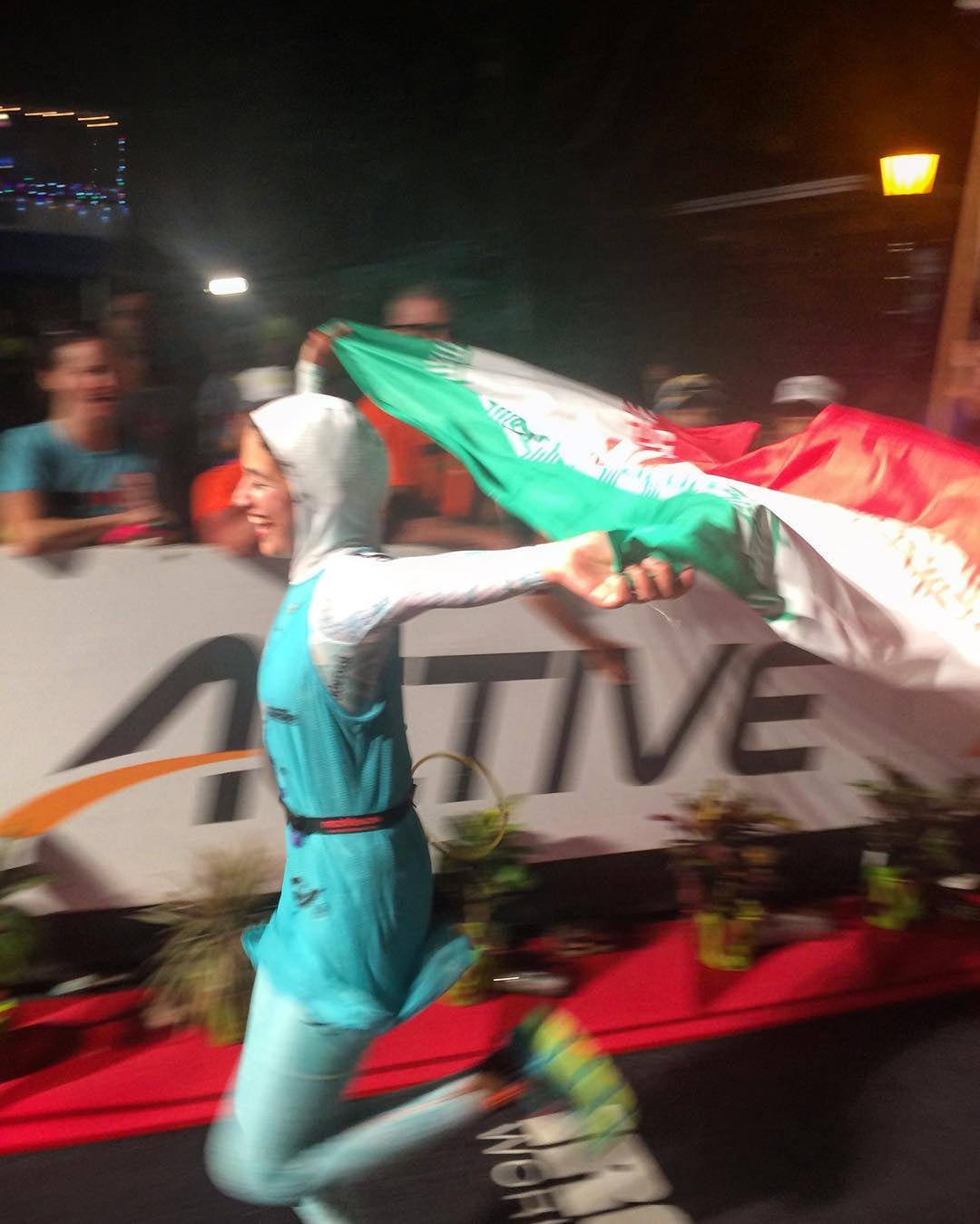 Just over 13 hours after her start time, with the wind at her back and soft tropical rains coming down through the 82-degree night sky, Shirin Gerami held the Iranian flag behind her as "The Voice of Ironman" Mike Reilly bellowed out the long-awaited words, "Shirin Gerami, YOU are an Ironman."

Shirin is the first woman who has ever been allowed to represent Iran in triathlon competitions, and on Saturday we watched history in the making as a beaming Shirin soared across the finish line in Kona, HI, securing her place as the first Iranian woman to become an Ironman World Champion. Not only did 26-year-old Shirin have to go through the same kind of intensive, regimented, several-months-long training commitment that the other athletes did — plus the actual 140.6 miles of strenuous exercise (in a hijab, mind you) — but she also had to work against the odds and her nation's government just to be there.

In 2013, leading up to the PruHealth world triathlon grand final in London, Shirin told The Guardian that getting permission to compete was a process that took a little over four months. After writing a letter to the government and not getting a response for several months, Shirin showed up in the office in Tehran to prove she was serious. Because modesty is such a point of concern for the Iranian government, Shirin agreed to compete in a full hijab, covering all parts of her body except her hands and face. In addition to meeting the requirements of dress set forth by the nation's guidelines, Shirin also had to have a tent to change her clothes after coming out of the water from the swimming portion of the race. This was the beginning of Shirin's journey that would later lead her to the grueling Ironman World Championship.

And here's the kicker: she doesn't usually wear a hijab, NPR reported. Shirin lives in London and doesn't typically adhere to the Islamic nation's traditional dress code. But she sought after athletic gear that would meet Iran's standards to set a precedent for women coming after her and to show them that anything is possible. "If clothing can open a path for more women to participate in sports, then I believe it's one of the easier barriers to overcome . . . I am quite certain that with the right set of skills and knowledge, we can make clothes that won't hinder performance whatsoever. I don't know how long this journey is going to take me, but I really want to see it through," she told NPR.

Before the race begun, Shirin wrote this on her blog: "As I take my first steps towards Kona, I can't help but ask . . . What if I took the leap of faith and believed that I will get to the start line; support, permissions and paperwork in tact; with appropriate kit that won't hinder me in Kona; and physically and mentally prepared to take up this sporting challenge? Is there a limit to dreaming? Who knows what tomorrow brings, but today, I shall believe with my every being, work to the best of my ability, and continue dreaming."

Health
What a Roe v. Wade Overturn Could Mean For IVF
by Alexis Jones 2 weeks ago