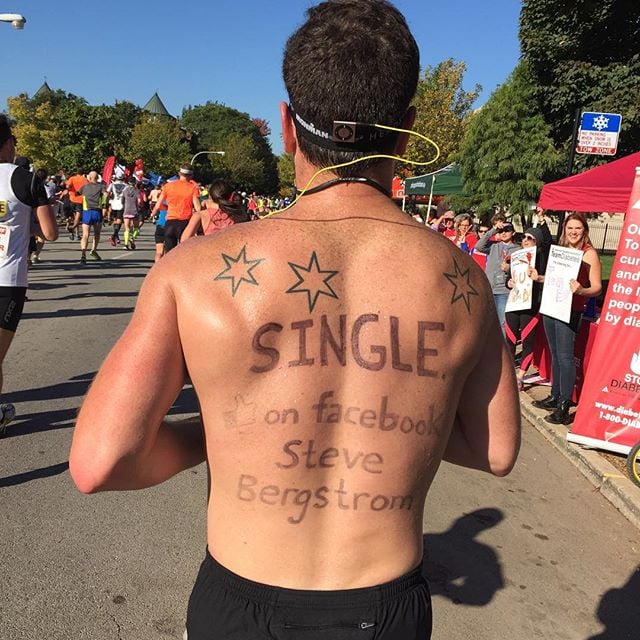 They say you can find love anywhere, and for Steve Bergstrom, he decided to test out his luck at the Bank of America Chicago Marathon earlier this month. The night before the race, the 30-year-old decided to write on his back, with some help from his cousin, "single and on Facebook." He told ABC News, "This was absolutely not a ploy to get as many dates as I can. I would like to find myself in a position where I don't have to do this again."

Luckily for Steve, his personal abs ad received more attention than he thought postrace. Over the next several days, he said he received several Facebook friend requests from women who saw him run and soon reached the limit with 1,000 friend requests, including one from Liz Heisler, who had also come to watch the race with a sign of her own.

"She was standing with a sign with a picture of her cat that said 'My mom is searching for a #catdad,'" Steve said. "I told her if we don't meet up and have a drink when you held up a sign and I held up a sign, then we're missing out on good storytelling later."

The two eventually met up and have gone on two "great" dates since. Steve added, "It's been a fun couple of weeks to say the least."

And as far as we know, ladies, Steve is still single . . . and still on Facebook.

Healthy Living
After a Devastating Loss Last Year, I Began Running — and It Transformed My Life
by Michelle Edgar 1 week ago

Workouts
7 Tips For Safely (and Comfortably) Running in the Snow, Straight From Experts
by Kacie Main 2 weeks ago

Running
Is Your Knee Pain Worse at Night? A Physical Therapist Explains Why That Might Be
by Victoria Moorhouse 3 weeks ago