I've been on a dried fruit kick lately, with dried mangoes being my absolute favorite. I have always bought the unsulfured variety since the sulfured ones almost always contain sugar, which I think is absurd. Isn't fruit sweet enough already? But the other day I was shopping at a new store and had a craving for dried apricots. I found a bag that were sulfured (the ingredient was sulfur dioxide), but contained no added sugar, so I bought them. Then later I thought, is it unhealthy for me? 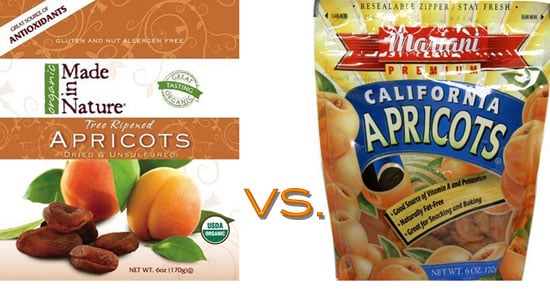 If you've wondered the same thing, then read more.

Sulfur dioxide is used as a preservative in dried fruit to prevent it from spoiling, and also to preserve the fruit's gorgeous and appetizingly bright color. That's why unsulfured fruits tend to look brownish or black. It sounds gross, but sulfur dioxide is a gas that's created by burning coal or oil, which both contain sulfur. This gas smells similar to rotten eggs and though used as a food preservative, it's also used in products as disinfectant or bleaching agents.

You may have heard that breathing in sulfur dioxide gas is toxic, and too much exposure can cause serious illness or possibly even death. It may make you feel better to know that when used as a preservative, only trace amounts are found in foods such as dried fruits, so the FDA considers it safe to consume.

For some people who are sensitive to the preservative, being exposed to sulfur dioxide can lead to breathing problems such as asthma, emphysema, chronic bronchitis, and respiratory disease. When eating foods treated with this gas, some may experience skin rashes, an upset stomach, or an asthma attack. If you've had a reaction, definitely go for the unsulfured dried fruits.

I try to buy only unsulfured dried fruits because most treated dried fruits tend to contain added sugars. I feel better knowing that sulfur dioxide is deemed as safe in small amounts, so I'll finish those dried apricots I just bought, but won't go out of my way to buy them again. If you have a difficult time finding unsulfured versions at your grocery store, I've had good luck at health food stores, or you could always order online.