If your contraception has lead to extra pounds, acne, and other problems, our friends at Shape help explain why — and what to use instead. 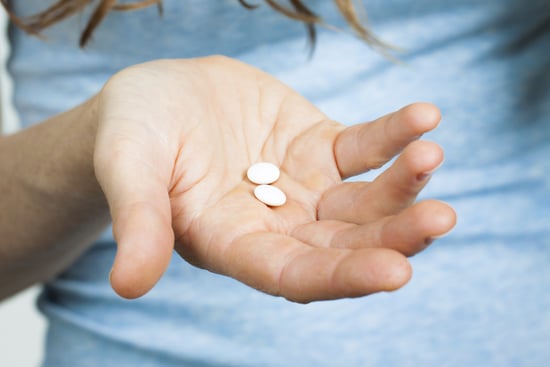 Birth control has one great upside: no pregnancies! (Yes, it’s not a 100-percent guarantee, but it’s pretty darn reliable.) But in order to reap that benefit, you may also have to deal with extra pounds, depression, or other unpleasant side effects. While at times these are just mild irritations, for some women they can become so debilitating that they quit using their BC.

No use resorting to the pullout method, though. There are reasons certain women tend to react differently to each type of contraception—and there’s one out there that’s best for you. Learn what’s up with your body and your alternatives, then talk to your doctor to determine your No. 1 bet.

Even if you were the most even-keeled girl out there before you started taking BC, the onslaught of synthetic hormones found in most birth control methods can wreak havoc with your moods, says Elizabeth Reynoso, M.D., an ob-gyn with Drs. Goodman and Partridge in Arizona. All hormonal options contain some amount of a lab-formulated version of estrogen and progesterone, the two hormones that, along with testosterone, control your cycles. Reynoso says that occasionally traditional hormonal birth control can exacerbate depression and anxiety because of the effect hormones have on the intricate balance of serotonin, dopamine, GABA, and norepinephrine, all "feel-good" neurotransmitters in the brain. Estrogen in particular plays a role in depression, with too little causing a dip in serotonin—and once this happens, the ovaries produce less estrogen, starting a vicious cycle of feeling bad. On the other hand, too little progesterone is associated with anxiety since the hormone has a calming effect.

Who’s at risk? Women who have a personal or family history of depression or anxiety.

The worst offenders: While any hormonal birth control has the potential to make you depressed or anxious, the Norplant (an implant in your upper arm) has the worst track record, possibly because it is a progesterone-only device and further encourages an imbalance of hormones.

Consider switching to: Reynoso recommends first trying a method with no hormones or fewer hormones, such as the ParaGard IUD (intrauterine device) or Mirena IUD, respectively.

Your monthly visit is bad enough, but for some women their cycle is unpredictable. Unexpected vaginal bleeding is one of the most common birth control complaints that Khai Ling Tan, M.D., a gynecologist with the all-female Phoenix practice MomDoc Women for Women, hears. While all the reasons for it aren’t entirely clear, having too little estrogen can cause your uterine lining to build up excessively, leading to random spotting.

Who’s at risk? Smokers, as lighting up breaks down estrogen in the body, causing an increased chance of bleeding, heart problems, and possibly reduced effectiveness of the pill. Women going on the pill for the first time also have a greater risk because it seems to take the body some time to get used to the synthetic hormones, and breakthrough bleeding is part of that adjustment process for many women. Luckily this often goes away within several cycles.

The worst offenders: While any hormonal birth control can cause irregular cycles, the Mirena IUD, Depo-Provera shot, and Nexplanon implant are the most common offenders because they are progestin-only methods. Without estrogen, cycles can become interrupted, intermittent, or even stop completely.

Consider switching to: Tan recommends a pill, patch, or ring with a slightly higher dose of estrogen. Because more is not always better (too high hormone levels can lead to complications), she says that you should only take the smallest amount that you need to regulate your cycles.

Find out how birth control affects weight and more after the break!

While most birth controls are actually proven to not cause weight gain in the general population, Reynoso acknowledges that everyone responds differently to different medications. Estrogen is known to increase satiety by having an inhibitory effect on appetite, so having low estrogen can make you hungrier. Progesterone, on the other hand, stimulates your appetite, which helps explain those pesky PMS chocolate cravings since the hormone is at its highest levels the two weeks between ovulation and your period.

Who’s at risk? It’s hard to say, as researchers are pretty adamant that birth control doesn’t cause weight gain.

The worst offenders: Women on the Depo-Provera shot are twice as likely to become obese after three years than women on other forms of birth control, though the reason remains somewhat of a mystery. A 2009 found no connection between the shot and caloric intake, fat consumption, or amount of exercise on body mass changes.

Consider switching to: Reynoso says intrauterine devices may be best since ParaGard has no hormones and therefore cannot cause weight gain due to hormones, and Mirena has very low amounts of progesterone that don’t act on the entire body but only act locally on the uterine lining to stabilize and thin it out.

As bad as breaking out before your prom was, breaking out before your 10-year high-school reunion is even worse, and some birth control methods can exacerbate skin problems. The hormonal ups and downs over the course of your cycle are often the culprit, Reynoso says. As progesterone dominates in the second half of your cycle, your body produces more sebum, the stuff responsible for making your t-zone look like an oil slick. Progesterone also minimizes your pores, giving you a smoother-skinned look, and the combo of tightened pores and extra sebum equals breakouts. Plus you have proportionally more testosterone in your system right before and during your period, which can also lead to more zits.

Who’s at risk? Women with oily skin are already fighting an uphill battle with their hormones. Obese women are also at increased risk because the more you weigh, the more testosterone your body produces.

The worst offenders: Because progesterone has some androgenic qualities similar to testosterone, any progestin-only pills or the Mirena IUD can cause acne.

Consider switching to:
Monophasic pills—those with the same amount of hormones throughout the month—work very well to treat acne, Reynoso says, because they short-circuit your hormonal fluctuations. The type of progestin used in your birth control may also be the issue, Tan adds. She recommends BC with either norgestimate or desogestrel, which seem to be better tolerated than other types. Ortho Tri-Cyclen contains norgestimate and has a great track record for treating adult acne.

Whether you become a raging monster or just want to curl up with your best friend Ms. Hot Water Bottle for three days, the bloating, moodiness, headaches, cramping, and other PMS goodies can worsen with some birth control methods, Tan says. The sudden drop in hormones when you start the sugar pills (the ones at the end of your package that contain no active ingredients) can intensify PMS as your body scrambles to deal with the loss.

Who’s at risk? Women with a family history of depression or who are under a lot of stress are particularly susceptible to variations in hormones. Also at risk are those who eat a lot of processed, sugary, or salty foods, as these are often deficient in nutrients that help mitigate PMS such as magnesium and vitamin E.

The worst offenders: Multiphasic pills, with their defined ups and downs, can increase the volatility in women’s cycles. Progestin-only pills, thanks to their lack of happy-ifying estrogen, can also magnify PMS symptoms.

Consider switching to: For girls with awful PMS, lower doses of progestin are the key, Tan says, because having more progesterone than estrogen can heighten the cramps, moodiness, headaches, and bloating that typically signal the arrival of Aunt Flo.

Some women's PMS symptoms may be so severe they fall under the category of premenstrual dysphoric disorder (PMDD). Pills such as Yaz, Yazmin, and Beyaz are specifically designed to treat this condition. "These women would probably benefit from using the pill or ring continuously and skipping their period altogether," Reynoso says, as avoiding the hormonal crash brought on by the "free week" can help stabilize a woman’s symptoms. In addition, it seems the effect is cumulative, and the longer time you have variations in your estrogen, the more severe your PMDD. If you chronically struggle with severe feelings of anger, depression, fatigue, irritability, inability to focus, and sleep problems, among other things, talk to your doctor.

Although most hormonal birth control methods, given time, will lessen your flow, Tan explains that there are some instances when it instead becomes worse, making it seem as if your uterus is suddenly staging its own production of Carrie.

Who’s at risk? Women with a history of heavy bleeding, fibroids, and endometriosis can be particularly sensitive to any irritation of the uterus itself.

The worst offenders: The copper in the ParaGard IUD alters the uterine lining and can cause it to shed more.

Consider switching to: Because it drastically thins the uterine lining, the Mirena IUD is the best option for reducing heavy flows, Reynoso says. "Many women who use the Mirena IUD have no period with it, and most other women have significantly lighter periods with it." She adds that in studies comparing Mirena to endometrial ablation (a surgery to reduce bleeding during your period), patient satisfaction for treating heavy bleeding was the same.

More on SHAPE:
3 Alternatives to Burpees
20 Satisfying Fall Meals for Any Diet
What Men Wish Women Knew About Sex

Healthy Living
This TikToker Compares How We Talk About Mental Illness to a Broken Leg, and It's Too Real
by Christina Stiehl 15 hours ago

Healthy Living
Fact: You Can Have an Ovarian Cyst Without Even Knowing It — Here's How They Form
by Victoria Moorhouse 17 hours ago

Healthy Living
If You Have Endometriosis, Consider These 3 Types of Birth Control to Help Alleviate Pain
by Maggie Ryan 22 hours ago

Product Reviews
Hear Me Out, Migraine Sufferers: This Cooling "Headache Hat" Has Changed My Life
by Karen Snyder Duke 1 day ago