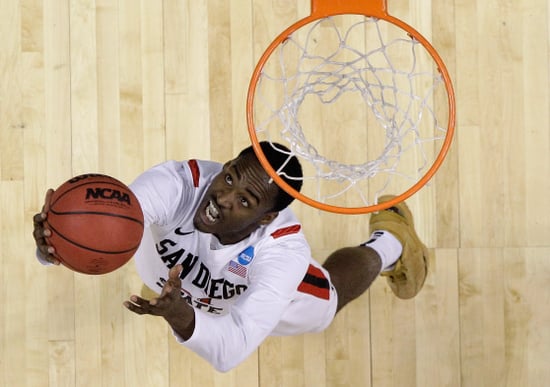 March Madness is officially in full swing! For anyone who's feeling a little clueless about the rules of basketball, you'll be glad to know that the game is relatively easy to follow. Once you understand the basics, you'll be feeling like a pro in no time.

The General Game
Two teams have five players on the court at all times. The game starts with a tip-off, where two opposing players attempt to gain control of the ball after it is tossed up into the air in between them by an official. Once a team gains possession of the ball, it has 35 seconds to take a shot. If the shot is made, the other team starts with the ball and a new shot clock. If the shot is missed, the team that rebounds gets a new shot clock.

The Court
The game is played on a rectangular court with a 10-foot-high hoop at each end. The court is divided in half by the midcourt line, where the tip-off takes place to start the game. The three-point line is the designated arc surrounding the basket, and the free-throw lane (commonly referred to as the key or the paint) is the colored area underneath the basket. Although it's a small section of the court, the majority of the action takes place in the free-throw lane.

How to Score
When one player makes a traditional basket, they score two points. Then the ball goes to the other team to give them a chance to score. If a basket is made outside of the three-point arc, that basket is worth three points. A free throw, shot from the top of the free-throw lane, is worth one point.

Keep reading for the most common fouls and violations that stop the game.

Shooting Foul: If a defender under the hoop makes contact with someone who's in the middle of shooting the ball, this is a shooting foul. When this happens, the player who was violated gets to make two or three free throws. The number is dependent on whether the shot was taken in front of or behind the three-point line.

Technical Foul: Violations or misconduct that don't necessarily have to do with the rules during play (but hinder the game) are technical fouls. A player or coach can be called with a technical foul; the most common kind is unsportsmanlike conduct.

Holding: If a player grabs someone's jersey or body to interfere with their ability to move while playing, this is a holding violation. When this happens, the player who experienced the interference shoots one to three free throws from the top of the free-throw lane.

Traveling: When a player is holding the ball and moves one foot or both feet illegally, this is traveling. It's most common when a player takes more than two steps without shooting, dribbling, or passing the ball.

Double Dribble: If a player dribbles the ball, picks it up, and then dribbles it again without shooting or passing to a teammate, this is a double dribble. If this happens, it results in a turnover, meaning the opposing team gets possession of the ball.

Three-Second Rule: If a player is holding the ball in the paint for more than three consecutive seconds while his team is in control of the ball, it results in a turnover.

Healthy Living
I'm a Light Sleeper, and This Solution Has Helped Me Rest More Soundly Than White Noise
by Lauren Manaker 15 hours ago

Healthy Living
I Don't Want My Old Body Back, and Here's Why You Shouldn't Either
by Kennedy Hill 17 hours ago