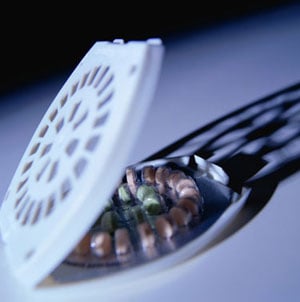 Some good news just came in for women on the pill. In a new study, British researchers discovered that those who took birth control pills lived longer than those who didn't. The study followed 46,000 women for nearly 40 years, most of whom were on the pill for about four years. Experts found that the pill reduced women's risk for bowel cancer by 38 percent and other diseases by 12 percent. Being on the pill may also cut a woman's risk for ovarian and endometrial cancers.

Researchers aren't sure why the pill would increase longevity in women. It may have to do with suppressing ovulation or the fact that women on the pill generally live healthier lifestyles. What they do know is that the benefits of taking the pill definitely outweigh the risks. So tell me . . .

Healthy Living
This New Cereal Is Made With Adaptogens to Help You Relax, and We'll Take 5 Bowls!
by Tamara Pridgett 16 hours ago

Workouts
Dance, Groove, and Burn Calories With These 30-Minute Dance Workouts on YouTube
by Sydni Ellis 20 hours ago

Healthy Living
From HIIT to Yoga, Here's How to Work Out, According to Your Menstrual Cycle
by Lauren Pardee 2 days ago