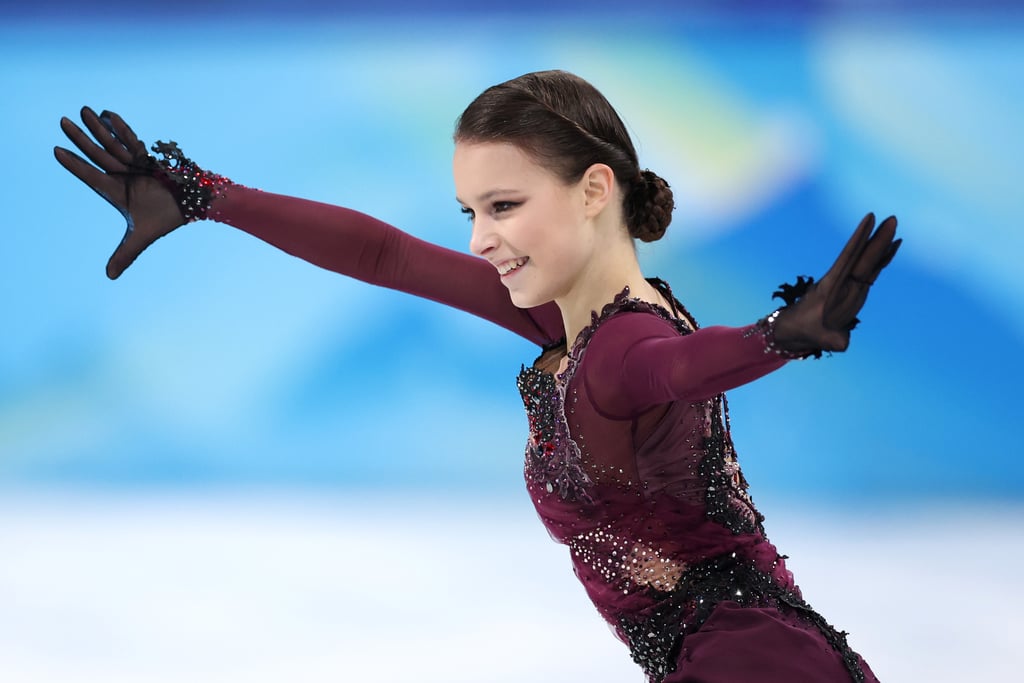 Anna Shcherbakova, representing the Russian Olympic Committee, has won the women's figure skating competition at the Beijing Olympics. She came into the free skate on Feb. 17 in second place following her short program two days prior, and she showcased a beautiful routine filled with high technicality, two quads, and artistic flair. She earned a total score of 255.95. Silver went to teammate Alexandra Trusova (251.73), who brought a "Cruella"-themed performance, and bronze went to Japan's Kaori Sakamoto (233.13).

It was a stunning final to say the least, given the controversy surrounding ROC figure skater Kamila Valieva's presence in the event despite a positive doping test from late December. Details about this doping scandal can be found here. The 15-year-old was expected to win — she'd led the competition after a 82.16-scoring short program on Feb. 15 — but she landed just off the podium on Feb. 17 following what could only be observed as uncharacteristic falls and other jumping errors in the long program.

Americans Alysa Liu (208.95), Mariah Bell (202.30), and Karen Chen (179.93) finished in seventh, 10th, and 16th, respectively. Chen made a few mistakes, including a fall, but still skated with the standout artistry she's known for. Liu and Bell were all smiles after their solid performances.

A dark cloud of tension, emotion, and anticipation has lingered over the sport of women's figure skating in Beijing, and you could see how much the events of the past week impacted competitors. Trusova, a 2021 world-championship bronze medalist, had five quad jumps programmed into her performance (the same number of quads as Olympic gold medalist Nathan Chen). She, however, broke down in tears following the free-skate results, visibly angry. It was unclear what she was reacting to during the live broadcast, but Reuters reports that a translation included, "I hate this sport." She explained in a post-competition news conference that she was frustrated by not winning "major events for three years," the outlet reported.

Shcherbakova, the reigning women's figure skating world champion, looked distraught as her teammates were consoled — Valieva was also overcome with emotion after her turn on the ice. Sakamoto, who was able to get on the Olympic podium sans any quad jumps due to her pristine execution, also shed tears, perhaps happy ones.

"I really don't believe what I'm seeing," NBC commentator and Olympian Tara Lipinski said on air. "This emotion . . . it's just been built up all week." She noted that the tension affects "everyone involved, not just [Valieva]." Fellow Olympian and commentator Johnny Weir, along with colleague Terry Gannon, pointed out that the Court of Arbitration for Sport (CAS) argued suspending Kamila from Olympic competition would cause "irreparable harm" and impact her mental health. However, Weir said, "I wonder what they're thinking now as to what just happened to Kamila Valieva."

"I can't watch this. They all look devastated. This just shows that these a children that are put in a position that is so wildly unhealthy and harmful to them. I'm sick to my stomach," Ashley Wagner, team bronze medalist in Sochi 2014, wrote on Twitter.

Twenty-five athletes, not the usual 24, were allowed to qualify through to the free skate on Feb. 17. Had Valieva finished on the podium, no medals would have been awarded until her case was heard in full in the event that she was disqualified. Medals have not been awarded for the team event that occurred earlier in the Olympics, where the ROC received gold, Team USA earned silver, and Team Japan got bronze.

Many prominent figures within and outside of the sport have spoked out about the issue of "clean skating," citing that it's a systemic problem and Valieva, being a minor, is caught up in its consequence. The free skate on Feb. 17, though, illustrated the ramifications that CAS's decision had on her competitors as well.

Ahead, see images of Shcherbakova and her fellow Olympic medalists after what will surely go down as one of the most memorable competitions in Olympic figure skating history.

Related:
The Quad Jump Is Exactly What You Think It Is, and It Has Transformed Figure Skating
Previous Next Start Slideshow
OlympicsSportsWinter Olympics 2022Figure SkatingAthletes