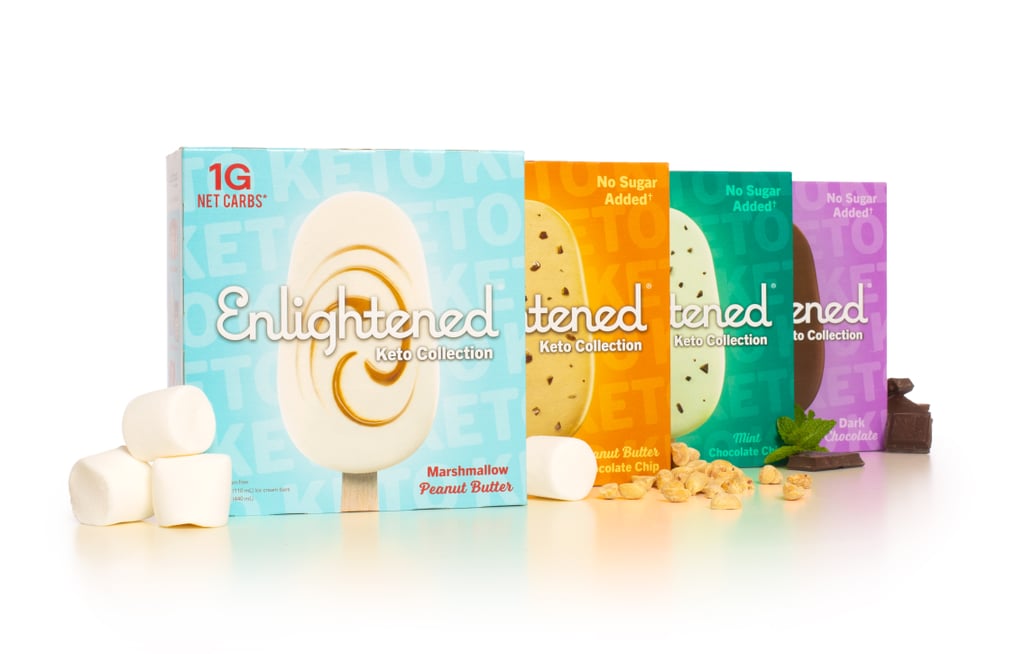 Never Thought You Could Eat Ice Cream Bars on Keto? Enlightened Wants to Change Your Mind

In August, Enlightened brought us its keto collection, seven pints of ice cream containing less than one gram of sugar and one gram of net carbs per serving. Now, one month later, the company is going smaller, but keeping it cool and keto with Enlightened keto ice cream bars. At 180 to 190 calories, one gram (or fewer) of sugar, and only one gram of net carbs per bar, they seem like the type of mid-day snack or late-night dessert that'll satisfy your sweet tooth even when you're looking to stay low-carb. These bars are also an excuse to eat ice cream all year round (sure, we know Summer has officially ended, but it's good wherever, whenever).

The bars come in four flavors: Mint Chocolate Chip, Peanut Butter Chocolate Chip, Dark Chocolate, and Marshmallow Peanut Butter. An Enlightened Ice Cream rep told POPSUGAR that the response to the brand's keto collection pints blew them away. "Very early sales data shows us, in only two weeks, Enlightened keto collection flavors became our bestsellers," the rep said. "We sell over 1,200 pints a day on our site alone. Not only that, but we continue to see an outpouring of gratitude, excitement, and support from Enlightened fans, new and old, who are thrilled to have this as an option." Because of this response — people just love to have keto treats — Enlightened is excited to introduce the keto bars (and so are, we presume, keto followers).

You can now purchase the new keto bars on EatEnlightened.com in four-packs ($48) and eight-packs ($68). You can also find them in select stores, such as Weis, Kings, Shoprite, Fairway, Bristol Farms, and more for about $6 per box. Ahead, check out the nutritional info for each flavor. Note: to calculate net carbs on the keto diet, most fiber and sugar alcohols can be subtracted, which is where the one gram of net carbs per Enlightened keto bar comes from. Get ready to enjoy!

Healthy Living
A TikToker Explains What Diet Culture Would Be Like If It Was a Person (Hint: It's Greedy!)
by Ashley Broadwater 1 hour ago

Healthy Living
There's Now a Birth-Control Gel, but Is It the Right Choice For You? Ob-Gyns Break It Down
by Kacie Main 5 hours ago

Healthy Living
Looking For the Perfect Jalapeño Marg? Try This Low-Sugar Recipe That's Only 200 Calories.
by Christina Stiehl 20 hours ago