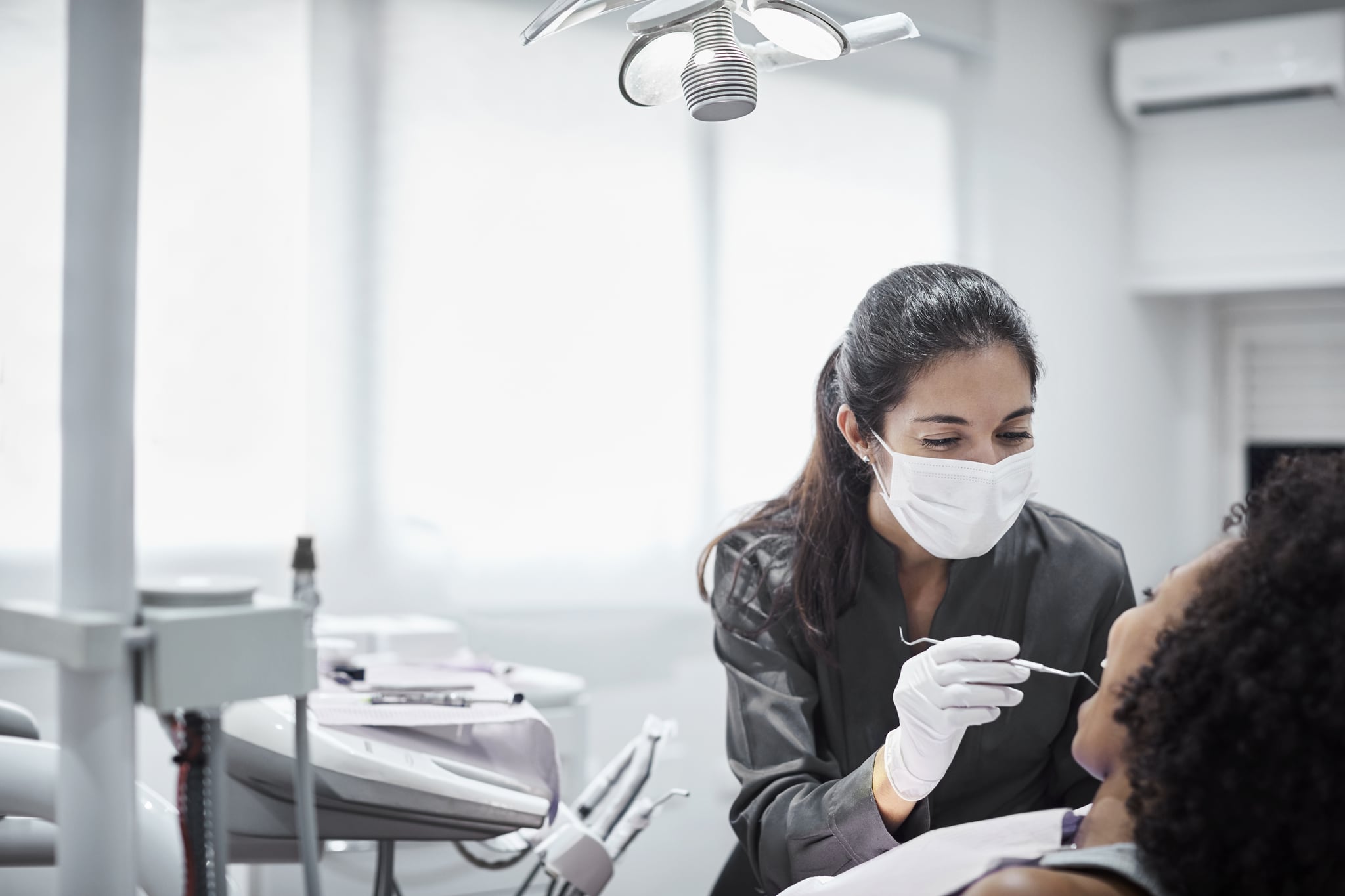 When I'm sitting in the dentist's chair listening to the hygienist list off what happens when you neglect your toothbrush and floss, I'm always a bit lost. The brushing and flossing part is crystal clear — things get foggy when she leaves me to decode the side effects, like gingivitis and periodontitis.

What she is trying to say when she mentions the oral-health jargon is that when you don't take care of your teeth and gums, they get sicker and sicker (like a domino effect!) — each stage of regressing health has its own name.

Terms like gingivitis and periodontitis are easily confused because one can lead to the other. Gingivitis is an initial inflammatory response of the gums to the presence of acidic plaque. If left untreated, gingivitis can progress into periodontitis, Siri K. Ziese, DDS, and the owner of Ziese Family Dentistry, explains.

Let's start from the beginning so you can clearly see how the oral-health dominoes fall.

When bacteria in your mouth mixes with the food you're eating, Ziese says it produces an acidic slurry called plaque. If not brushed and flossed away, that plaque will mix with your saliva to create calculus — a hard coating on your teeth and gum line, also known as tartar.

Through the growth of plaque and calculus, your gums produce the inflammatory response known as gingivitis, which can present as red, tender, and bleeding gums, she adds.

Related:
Plaque Can Contain 1,000 Different Bacteria — Here’s How to Keep Your Teeth Clean

Let's circle back to your good ole toothbrush and floss. To prevent plaque buildup (and worse), Ziese recommends brushing your teeth for at least two minutes in the morning and two minutes in the evening, as well as thorough flossing daily.

"If it has been six months since your last professional cleaning or calculus is building up on your teeth, a visit to your hygienist is necessary," she says.

"Once your teeth are cleaned, it will typically take at least one month of excellent home care to reverse gingivitis."

If you are at the periodontitis stage, Ziese says that typically patients need a professional cleaning called scaling or root planing that occurs below the gums (which are often numbed first!) to remove calculus buildup.

In the case of dental hygiene, a little really does go a long way. Keeping up with brushing and flossing can save you from this domino of oral-health complications and having to understand the confusing names that go with them.

lululemon
Orangetheory Released a Lululemon Apparel Collection, and Yes, There Are Leggings
by Maggie Ryan 4 days ago

Healthy Living
Black Olympic Athletes Reveal What Brings Them Joy, and It's Not Always a Gold Medal
by Christina Stiehl 4 days ago