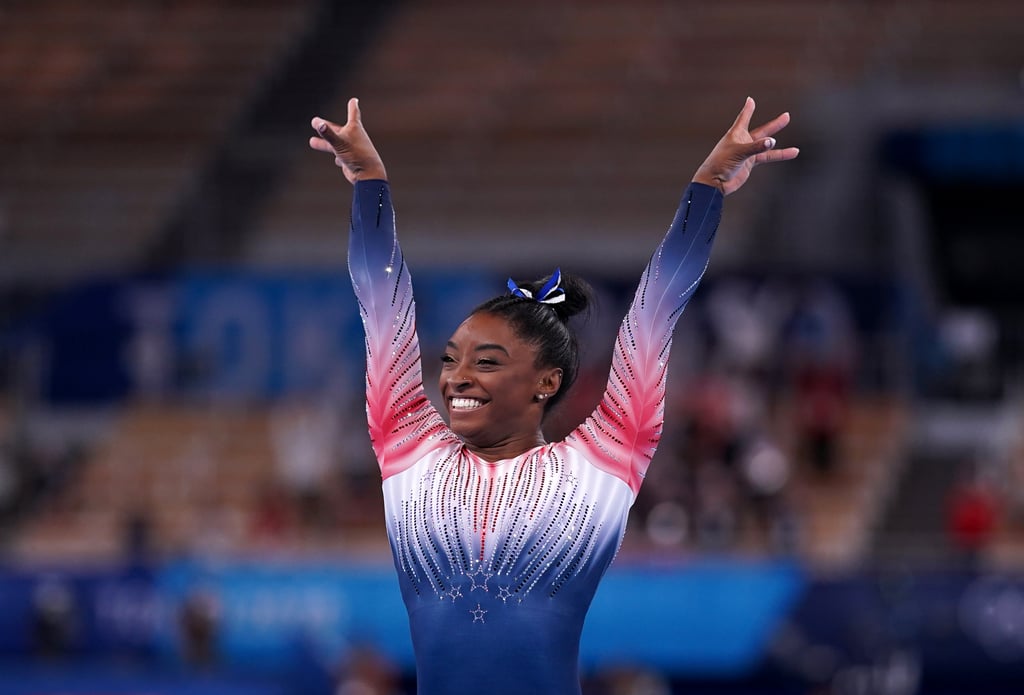 After returning to the Tokyo Olympics following her mental health-driven withdrawal from most of the competitions she qualified for (the team final once she was done vaulting, the all-around final, and the three other event finals), Simone Biles came back in stride to the beam final on Aug. 3, finishing third. This seventh medal across two Games ties Shannon Miller's record for most Olympic medals in US artistic gymnastics. China's Guan Chenchen, who qualified in the top spot and is capable of the highest beam difficulty in the world, received gold with a 14.633. Tang Xijing, also from China, earned silver with a score of 14.233.

NBC analyst and 2008 Olympian Bridget Sloan said during the live broadcast that Biles looked confident in her skills, controlled, and calm. The gymnasts don't have a 30-second "one touch" warmup in event finals, so that's important. All-around champion and teammate Suni Lee joined Biles for the beam final, having qualified in third place and finishing in fifth after a solid routine with a major balance check amid her flight series of side aerial connected to two back layout step-outs. She's still going home with gold (all-around), silver (team), and bronze (bars) medals.

Biles and Lee went back-to-back in the competition, and Biles, who won bronze on the event in the 2016 Rio Games, had a strong showing with just one visible minor error that a viewer's eye could pinpoint. She received a 14.000, and she changed her beam dismount from a double-twisting double backflip or a full-twisting double back to a double pike, lowering her starting value. The original dismount was the only real twisting skill in her routine.

Biles said that she was experiencing a case of what gymnasts call the "twisties," a disorienting and dangerous mental block where you lose all mind-body connection that has long been second nature. Its onset began following the preliminary round, and it impacted her vault during the first rotation of the team final.

Biles's return is about more than just contending for — and claiming — a medal. It's about returning to a sport that has given her so much success and sorrow after a mental struggle that most of us can't begin to comprehend. And the smile, the pure joy, on her face said it all.

Great athletes win medals. True champions are brave enough to acknowledge (even accept) hardship, then, in the face of adversity, show up to support their teammates and remain vulnerable while the whole entire world is watching. Biles came out and performed, and she is leaving Tokyo with team silver and beam bronze, as well as a new sense of self. "[T]he outpouring love & support I've received has made me realize I'm more than my accomplishments and gymnastics which I never truly believed before," Biles wrote on Twitter one day after the team final.

"I wasn't expecting to medal," Biles stated post-competition, according to The New York Times. "To have one more opportunity to be at the Olympics meant the world to me."

Ahead, check out photos from Biles's warmup and beam routine on Aug. 3. It's unclear where she stands in her gymnastics career — she has noted in the past that she isn't ruling out the Paris Games in three years — but she's ending her second Olympic Games on a positive note and inspiring people along the way. Biles added to a bigger conversation about mental health at a time when viewers may not be focused on it and, instead, are fixated on no-excuses performances despite risk, for the sake of hardware. We applaud her for the remarkable GOAT she is.