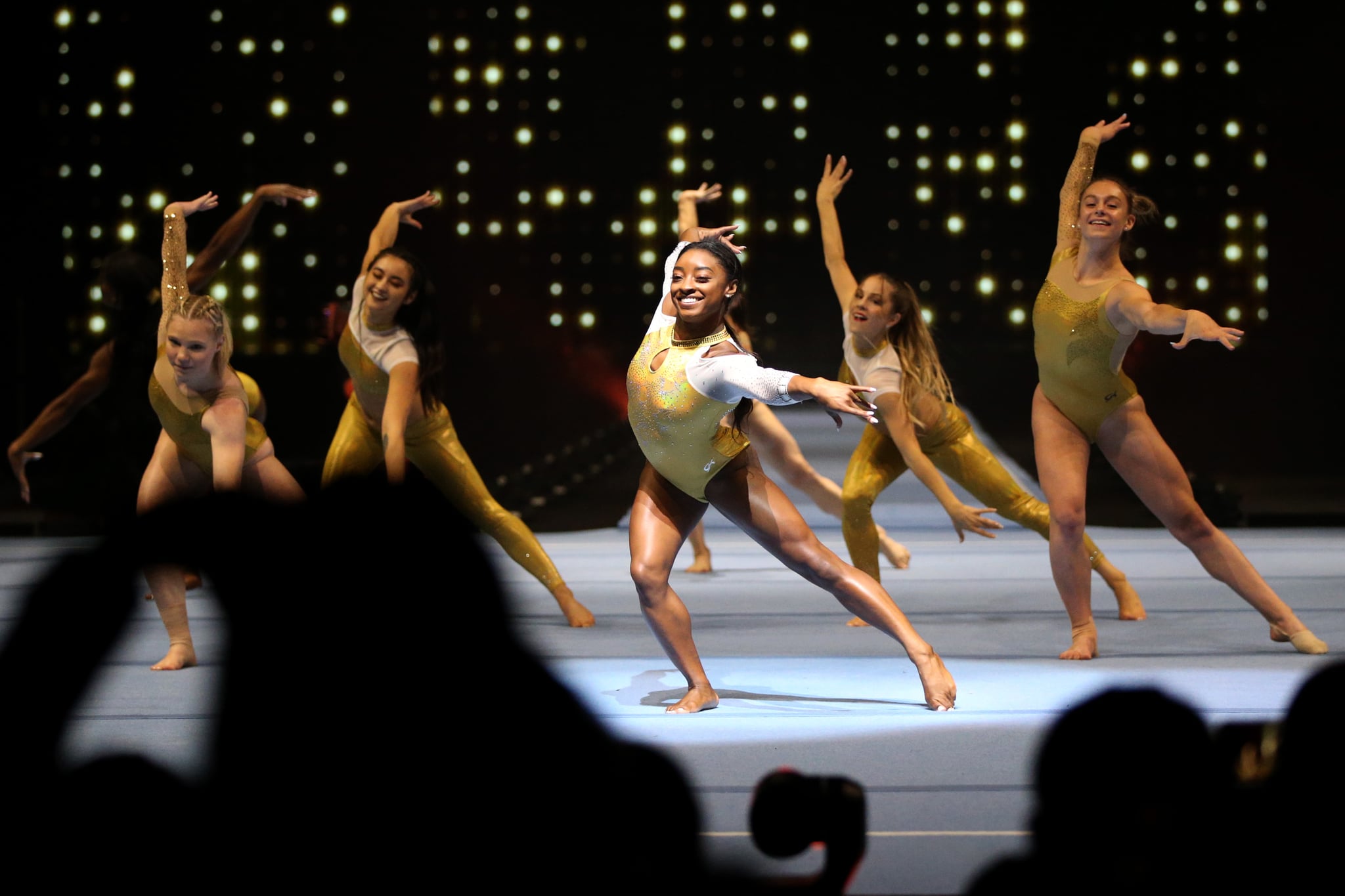 As animated gold numbers counted down on the Barclays Center jumbotron, I knew the Gold Over America Tour would be flashy and fun, but I wasn't prepared for the emotions it evoked. The world of elite gymnastics (and the sport as a whole) continues to face a reckoning after the longstanding culture of abuse, and this show, full of entertaining dance numbers and high-flying flips, signified a larger message of resilience and hope for young gymnasts. I cried quite a few times — especially during a spoken word piece from former UCLA Bruin Katelyn Ohashi and one segment where home videos played across the screen to Coldplay's "Fix You."

Now, you can see the same heart-warming moments and excitement at home for a one-time streaming event on Dec. 4 at 1 p.m. PT / 4 p.m. ET through Stellar by purchasing tickets on the Gold Over America Tour website starting at $20. The tour, which had its last stops this past weekend, featured every athlete who represented Team USA in women's artistic gymnastics at the Olympics minus Sunisa Lee, as well as other world-class gymnasts: Ohashi, Laurie Hernandez, Morgan Hurd, Nia Dennis, Shilese Jones, Chellsie Memmel, Mélanie Johanna de Jesus dos Santos, Ellie Black, and understudy Lynnzee Brown.

When POPSUGAR sat down over Zoom with Olympians Simone Biles and Jordan Chiles, Chiles said she thinks the energy from the in-person shows will translate over the live stream because fans are "still seeing us being able to do what we love. I think it's going to be pretty cool, and I think everybody's going to enjoy it."

In addition to the powerhouse lineup of athletes were stellar dancers, and Biles said, "to bring both of our creative worlds together and put on a show like this has been amazing." She added, "We love the dancers. We're going to miss them when the tour is over. But we're going to stay in contact, but it's been a blast to get to know them."

If you've followed along on social media during this seven-week tour, you could see bonds forming behind the scenes (it truly did look like a blast!). In fact, a group of them even got "golden" tattoos in honor of the tour, and Biles noted that director Mark "Swany" Swanhart might get a matching one. Swanhart wrote on Instagram recently that his vision for the tour's premise was "[f]or kids of ALL AGES to keep reaching FOR their dreams but to know that their worth doesn't reside in reaching them. That true gold resides INSIDE of us… untouchable and ever present… That we are all so much more than we could ever imagine."

"Gymnastics has been in a bad light for a couple of years, but to show this excitement and show what each of us have to offer, which is unique, it's different. It's golden."

The tour showcased bits of routines — as opposed to the full, more difficult performances you'd see at a gymnastics competition — and dance numbers, but it was also infused with important lessons like Swanhart mentioned, including those of mental health awareness. One segment, for instance, had Biles physically and metaphorically overcoming her mental struggles, untangling herself from dancers dressed in sweatshirts that read "your anxiety is lying to you."

When asked how they would describe their mental health today, Biles and Chiles both said theirs is a work in progress. "I think it's always going to be a work in progress, but I'm happy that I have that time to dedicate to my mental health and that I have the correct help that I need now, especially on the road because I know it could be difficult," Biles noted. Chiles agreed. "A lot of the time it can vary," she said. "So it's just kind of how you want to take it, how you want to put yourself in that position to just relax and really understand what's going on."

Gold Over America Tour was the brainchild of Biles and a talented team of professionals, but it turned into something bigger than her: it was about establishing joy and self-worth — and never letting go despite hardship. "It's showing that fun side of gymnastics because gymnastics has been in a bad light for a couple of years, but to show this excitement and show what each of us have to offer, which is unique, it's different," she said. "It's golden."