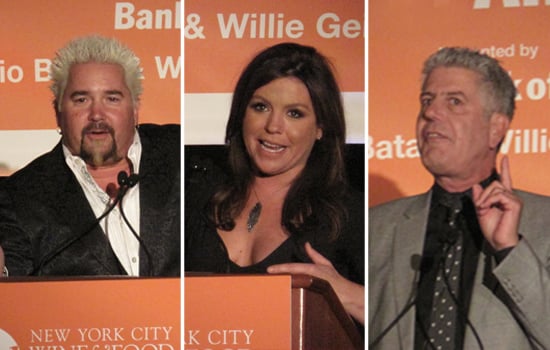 Talk about starting off with a bang: last night, the 2012 New York City Wine & Food Festival kicked off with a comedic roast of Anthony Bourdain by celebrity chefs and comedians, and it seemed like just about every star chef who's seen a camera was there to sling mud at the food personality who made his name slinging mud. As pal Sarah Silverman told Bourdain in a prerecorded video message: "There's gonna be a lot of great lines tonight, and you can't snort any of them."

Great lines indeed. It was a rare opportunity to see another side of the stars of Food Network, who puts on the yearly festival; everyone from the bubbly Rachael Ray to the modest Eric Ripert cracked a dirty sex joke (or 10). Although Bourdain was the subject of the roast, there were plenty of other subjects of interest, primarily Guy Fieri's douchiness, Mario Batali fat jokes, and Ray's inability to cook. Catch up with the best lines you missed from last night's shockingly irreverent, profanity-filled comedy roast of Anthony Bourdain.