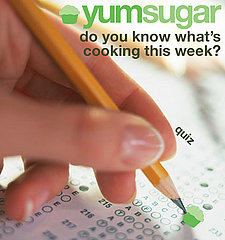 This week was a big one in the restaurant world, with the industry's biggest accolades, the James Beard Awards, taking place on Monday night. (We're sure a few attendees are probably still recovering from the festivities.) In other news, it's National Burger Week, so we'll be throwing at least a few patties on the grill this weekend!

Have you tuned into everything that's been going on over the last seven days? There's only one way to find out.

Do You Know What's Cooking This Week?

Who won this year's James Beard Award for Outstanding Chef?

How much food is wasted in this world every year?

T/F: Rachael Ray and Guy Fieri are hosting a new show on the Cooking Channel.

Manioc starch is a pantry staple in which country?

How much is Bernie Madoff's wine collection worth?

Which Food Network leading lady is not nominated for a Daytime Emmy this year?

T/F: José Andrés was popular in Spain before he was big in America.

Food NewsDinner
Around The Web

Dinner
Y'all, I Made the Baked Feta Pasta With Boursin Cheese Instead, and It's SO Much Better
by Kalea Martin 16 hours ago