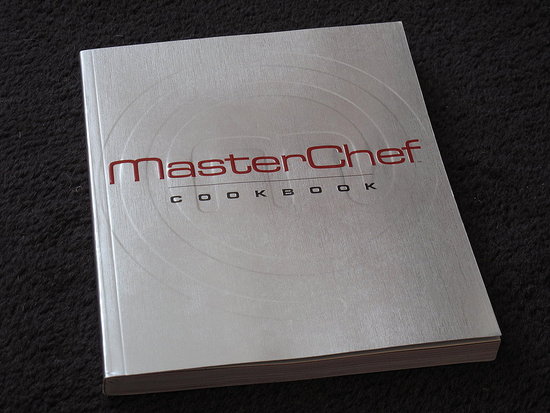 A new title to be released today, MasterChef Cookbook by JoAnn Cianciulli, hopes to perpetuate Gordon Ramsay's current Fox show of the same name. The book offers tips on essential kitchen techniques, highlights favorite chef ingredients, and includes over 80 recipes from both judges and contestants. But does it also give away the cooking competition's ultimate winner? Find out (warning: possible spoiler alert!) after the jump.

The book features recipes from all 14 home cooks competing on the show, but gives more press time to some than others. The exhaustive index, which lists the pages on which contestants have sidebars, photos, and recipes, reveals that five contestants share only two recipes, while four more share three recipes and three competitors have four recipes. One competitor, David Miller, has five recipes featured in the book. And even better, Southern ingenue Whitney Miller (no relation to David) not only has three full-page pictures, but also has recipes from six different challenges — a solid indication that she's passed the most eliminations. Here's a rundown of the competitors. See if you can predict who's going to stay through the end:

Take a look at the gallery of pictures I snapped below. Do you, like me, think the contestants with the highest number of recipes are the finalists?

Gordon RamsayBooksFOXNewsMasterChefCookbooksReality TV
Around The Web

Books
From The Kiss Quotient to The Ex Talk, Here Are 11 Asian-American Love Stories to Read
by Stephanie Nguyen 5 days ago

Books
If You Love Books but Don't Want Your Home Turned Into a Library, Shop These 10 Solutions
by India Yaffe 6 days ago

Books
A Running List of the Best Books of 2021, For All Your TBR Needs
by Maggie Panos 6 days ago