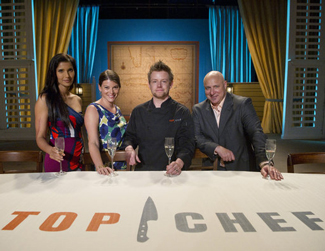 The Academy of Television Arts & Sciences announced its 2011 nominations for Primetime Emmy Awards this morning, and, as usual, a number of food programs were included.

On the exhaustive list of Emmy nominees were Top Chef for Outstanding Reality Competition (among other nominations); and Anthony Bourdain: No Reservations for Outstanding Nonfiction Series, with a number of additional nods for the series's post-earthquake Haiti episode.

Top Chef and No Reservations were in good company: McDonald's, also a nominee, has been acknowledged in the Outstanding Commercial category. If you were in charge of the awards, which TV shows would you nominate?

Food News
The "Edward Drink" at Starbucks Is Going Viral, and Here's Why
by Lauren Harano 4 days ago

Food News
A Cheez-It Cake Now Exists, and You Can Buy It Online If You So Choose
by Victoria Messina 5 days ago