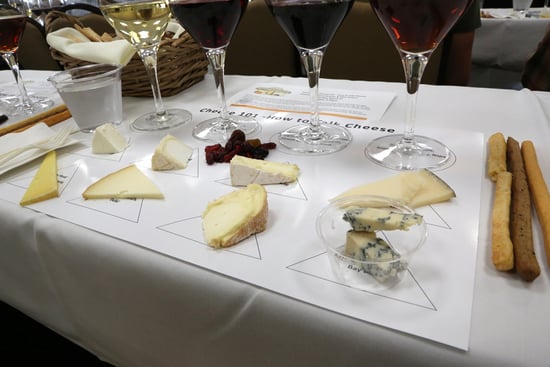 You don't have to be a certified cheesemonger to know how to talk cheese. At the California's Artisan Cheese Festival, Lassa Skinner, retail director of the magazine Culture: The Word on Cheese, spoke about how to conduct a cheese tasting on a basic level. Like wine, it begins with the varietal (of milk), continues to the body (the rind and cheese's texture), and ends with sniffing and savoring (the flavor). According to Lassa, when in doubt about the name of the cheese you recently had at a restaurant or party, describing these four components will help your cheesemonger guide you in the right cheesy direction. Keep reading to start smart cheese talking.

Milk
There would be no cheese without the milk! Each milk imparts a different flavor and texture, and with more tasting, you'll be able to distinguish the varieties without even looking on the label. Here are the types of milk you should know:

Rind
If you're guilty of cutting off the rind, stop! Unless it's a wax rind, assume you can and should consume it. It contributes to the overall flavor of the cheese and provides a textural contrast to the creamy interior. These are a few common rinds:

Texture
The texture of the cheese can refer to two things:

Flavor
Describe the flavor of the cheese using these techniques:

Food News
The "Edward Drink" at Starbucks Is Going Viral, and Here's Why
by Lauren Harano 1 day ago

Walt Disney World
Disney's Starbucks Tumbler Is Back in Stock, and It Features Doodles of the Park's Iconic Spots
by Lauren Harano 1 day ago

Food News
A Cheez-It Cake Now Exists, and You Can Buy It Online If You So Choose
by Victoria Messina 2 days ago