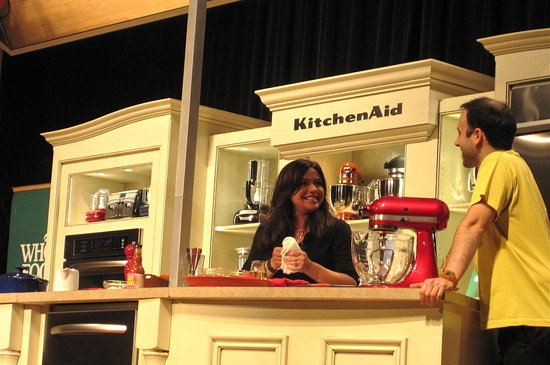 If you've ever watched 30 Minute Meals or her daytime television show, you'll know that celebrity chef Rachael Ray, who coined the terms Yum-O and EVOO, sometimes says the silliest things. Her demo at the Food Network New York City Wine and Food Festival was no different. While she walked the jam-packed audience through her bacon, leek, and tomato halibut and roasted tomato burger recipes, she managed to spit out some of her signature one-liners. I thought it would be fun to turn them into a quiz. I'll list a supposed quote, and you tell me if she said it at her demo or not. Ready, go!

Rachael Ray: What Did She Say?

"I love cooking with halibut. I always call it 'heck of a halibut' because there's so much you can do with it!"

"You know, I just love answering your questions. Feel free to stand up and shout them out at me!"

"I really want to do another special episode of Iron Chef America!"

"I'd eat my own arm if it were wrapped in bacon."

"I smell like a big salami. A Genoa salami with wine, black pepper, and garlic."

"I always liked the way 'Rachael Ray's Week in a Day' sounded because the day rhymes with my name, so I decided to do a show based around the concept for the Cooking Channel."

"John and I had such a nice time celebrating our anniversary in Italy this past August. It was just wonderful."

"John is really obsessed with apps. He has so many apps. His apps have apps."

"My favorite food depends on the season. I'm an equal opportunity eater!"