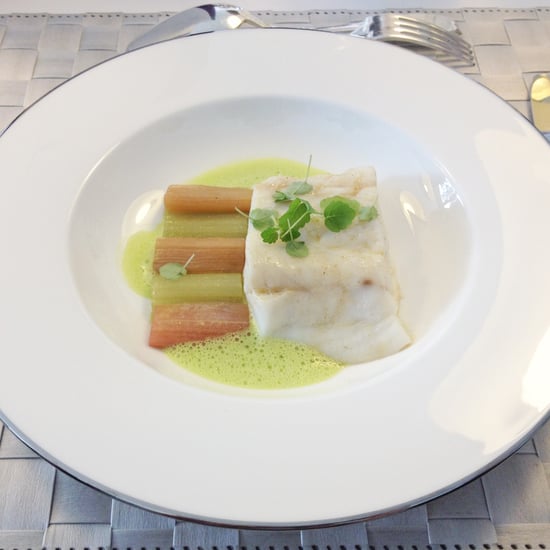 Did you ever think you could re-create a meal by a three-starred Michelin chef at home? Many of France native Anne-Sophie Pic's recipes are not for the home chef — unless one has some molecular gastronomy essentials handy — but her sea bass is comparatively straightforward, though admittedly not a fast and easy weeknight affair. Anne-Sophie left her usual station at her three-starred restaurant Maison Pic in the French town of Valence to take the helm at Electrolux's Chef's Kitchen at the Cannes Film Festival.

A table full of journalists was able to break from the cinema excitement at Cannes to sample Sophie's creations, which were also served at Wednesday night's opening gala. The party welcomed 650 guests for dinner, including members of this year's jury, like Nicole Kidman and head juror Steven Spielberg. With instructions on how to re-create the complex entrée, now Nicole and Steven (and you) can take a bit of elegant French fare home to the US.

Get the mouthwatering recipe.

Cinnamon leaves are available online. If you don't own a juicer, blend chopped apples in a high-powered blender, then strain it through cheesecloth, bundling the solids together to extract as much juice as possible. Alternatively, look for green apple juice at a juice bar, or substitute apple juice plus the juice of half a lemon.

Cannes Film FestivalDinnerRecipesSpringFishRhubarbCeleryPaleoSeafoodGluten-Free
Around The Web

Recipes
No Bonfire, No Problem: These Air Fryer S'mores Taste Like Exactly Like Summer
by Lauren Dana 8 hours ago

Recipes
These Banana Oat Pancakes Are Packed With Rainbow Sprinkles, So Feel Free to Make a Huge Stack
by Ashley Ortiz 10 hours ago