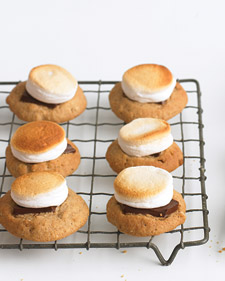 When I thought about the finish to a movie night in the park, s'mores immediately came to mind. However, proper s'mores involve a campfire, which is definitely not allowed in the park for movie night. Then I considered s'mores cupcakes, but without a cupcake carrier, the miniature cakes are hard to transport. I was just about to give up on the idea when I came across this recipe for s'mores cookies! The base of the cookie is a mixture of rolled oats and whole wheat flour. This is topped with a chocolate square and a large marshmallow. What a clever recipe, right? It's perfect for the park, the beach, the lake, or even a lunch box, so get the easy recipe now.