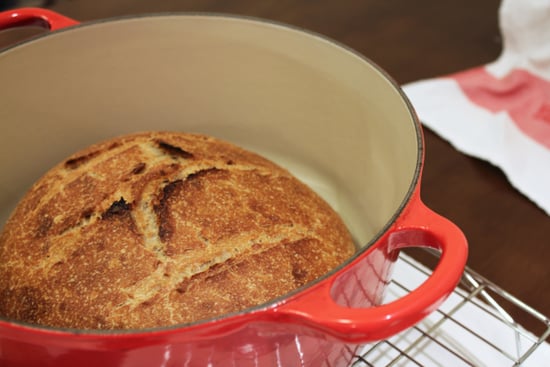 As a native San Franciscan, I can't get enough sourdough bread. While this isn't the only city where you can get a great loaf, it sure perfected the art before artisan bread hit the mainstream. So it was just a matter of time before I took a stab at a homemade version inspired by the town I call home.

Every region's sourdough gets its unique flavor from the yeast organisms in the starter. Therefore, my loaf has a different character than one baked in, say, South Florida. But wherever you are, you can expect that delicious tartness that gives the bread its name. For this attempt, I added some wheat flour to give it some nutty depth, but you can easily use all bread flour, too.

So roll up your sleeves and get ready for a kneading workout! For the recipe, just keep reading.

Recipes
No Bonfire, No Problem: These Air Fryer S'mores Taste Like Exactly Like Summer
by Lauren Dana 7 hours ago

Recipes
These Banana Oat Pancakes Are Packed With Rainbow Sprinkles, So Feel Free to Make a Huge Stack
by Ashley Ortiz 9 hours ago