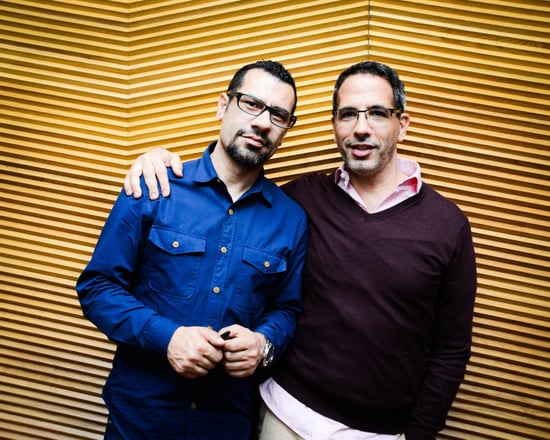 The chefs who tend to receive the most attention and adoration are the ones who make us feel like we're part of the table. Even if you can't travel to London to physically eat at Yotam Ottolenghi and Sami Tamimi's restaurants, flipping through their cookbooks and cooking your way through them is enough to feel like the chefs have pulled out a chair for you. And that's exactly what these Mediterranean chefs have intended. While in New York for the New York City Wine & Food Festival, the guys stepped away from the kitchen to talk about their latest American cookbook release, which ingredients we need to know about, and their upcoming cookbooks and restaurants.

POPSUGAR: Some of your fans might not realize that Ottolenghi: The Cookbook, while recently released in the US, was also the first cookbook you wrote in 2008. What types of changes were made from the original UK version to bring it to an American audience?
Yotam Ottolenghi: None, no changes, no.
Sami Tamimi: Just the introduction a little bit.
YO: Yeah, I wrote a new introduction, like a preintroduction for the special edition, and the rest of it has been Americanized. So grams to cups and all those kinds of things. Also, the cover changed.

PS: Have you been surprised by the kind of reception your books have gotten in America?
ST: Very much.
YO: Yeah, we have been surprised. We've been surprised for the last two years. First Plenty came out, then Jerusalem, and now our third book here. It's quite amazing.

PS: Which of your three cookbooks is your favorite and why?
ST: The first one (Ottolenghi: The Cookbook) we were really, really excited to do, because it was the first kind of baby and we gathered all of the good recipes that we know from all our shops. So it was a special thing to do. Jerusalem was a more private kind of journey into our roots and the flavors that we grew up with, and we tried to re-create them and bring them to life.
YO: I also feel the same that Jerusalem was the most personal book, because it really evoked memories, feelings, and history that we haven't really touched on for quite a few years. Going back was quite emotional and sentimental.

PS: Would you ever consider opening a restaurant outside of the UK?
YO: We've said no to this question about seven times today. The reason is, and people can't believe it, we don't see how we could do a trans-Atlantic operation, because we're so controlling. We run a group of restaurants in London and the idea of going in between — I just don't think we'll be able to maintain the standard if we were to do something like that.

PS: Thanksgiving and Hanukkah fall together this year. What recipes can you recommend?
ST: We're famous for using a lot of pumpkin and squash and lots of dried fruit and lots of matzo. Any of these recipes can actually be for both.
YO: Recently, I tried a recipe that we're probably going to use this Thanksgiving with sweet potatoes cooked with an orange juice that's been reduced to a syrup with brown sugar and cooked with some bitters and then served with goat cheese on top. So it kind of caramelizes and once it cools down served with goat cheese.

PS: What Mediterranean spice do you think more Americans should know about?
YO: So many, so many. There isn't really one spice . . . I could start a list.
ST: Iranian lime?
YO: Iranian lime is a tiny dried lime that either is put whole in a stew to give it a limey flavor or it's crushed into powder. You can add it to stews, rice, fish, vegetables; it tastes a bit like lemongrass.

PS: What ingredients can you not imagine life without?
YO: Tomatoes, courgettes [zucchini], eggplant. I think it's an unfair question.
ST: Garlic, lemon, olive oil of course. Rice. Herbs.

PS: What other chefs inspire you?
YO: I always tend to think we're inspired by home cooks [rather] than chefs, because this is the sort of food that we cook. I think for Sami, I imagine for you, your biggest inspiration was your mother, because you always replicate her flavors, her recipes, her ideas, her whole state of mind with cooking. I feel pretty much similar. It's not so much a person, but rather the whole idea of home cooking of various cultures. I went to the Far East and I met this Chinese woman who showed me how she makes her own tofu. She's in her 60s and she's been making her own tofu for dozens of years. I think that whole idea, that kind of knowledge of mothers and grandmothers; these are the people that I admire most, not so much chefs.

PS: What emotions do you hope your food evokes?
ST: For both of us, it's a lot about comfort food, and I do that a lot with whatever I cook. I always go back to the past and try to push this kind of comfort thing.
YO: The idea that it evokes a feeling of home, security, and sense of family. Some chefs aspire to astound and shock with their food. Although we do like strong flavors and interesting things, it's more about creating that sense of comfort, home, and ease.

PS: Do food trends matter to you? Do they influence your cooking?
YO: Yeah. We follow [them]. I don't think we're so affected by food trends.
ST: We are involved in cooking, restaurants, and the food industry. We need to keep our eyes open for what's on and what's not. But it doesn't affect our kind of cooking.
YO: I think we're more affected by our travels around the world, right? When we go to a new, exotic destination and come back from the market with all sorts of new ingredients — that's what inspires us.

PS: What are you working on now?
YO: We probably have another restaurant coming either in the next year or year after. We're looking for a location. We had one small restaurant close down in order to open a bigger one in London. I'm working on another vegetarian cookbook, so in the same kind of vein as Plenty, but the whole idea is not quite there yet. It's supposed to come out this time next year.

Food News
Pink Pineapples Exist, and You Can Order Them Online Right Now
by Julia Duda 4 days ago