The Pop Star — and Activist — We Need Right Now

If it weren’t for the COVID-19 pandemic, Becky G would be in the midst of her European summer tour for her debut album, Mala Santa, right now. Instead, she’s on a Zoom call with me.

Becky dials into our interview from the two-bedroom apartment in LA where she’s been sheltering in place with her boyfriend, LA Galaxy player Sebastian Lletget, for the last six months. She's shooting her cover story with POPSUGAR and I Am a Voter — a campaign aiming to create a cultural shift around voting — from home today. Fresh out of glam, Becky looks vibrant in a turquoise Aliétte blazer — which perfectly matches the LED light strip in the background of her makeshift studio. It’s a detail that was carefully taken into consideration, just like her decision to spotlight Black and Latinx designers in the photo shoot today. “We have different pieces from different designers for this whole cover story, because why not? There’s a lot of talent out there and a lot of beautiful pieces, like the one that I’m wearing,” Becky says. Her energy is bright and magnetic but balanced by a genuine down-to-earthness that makes my nerves about Zooming with a global, multiplatinum-selling pop star with 25 million Instagram followers instantly fade away. 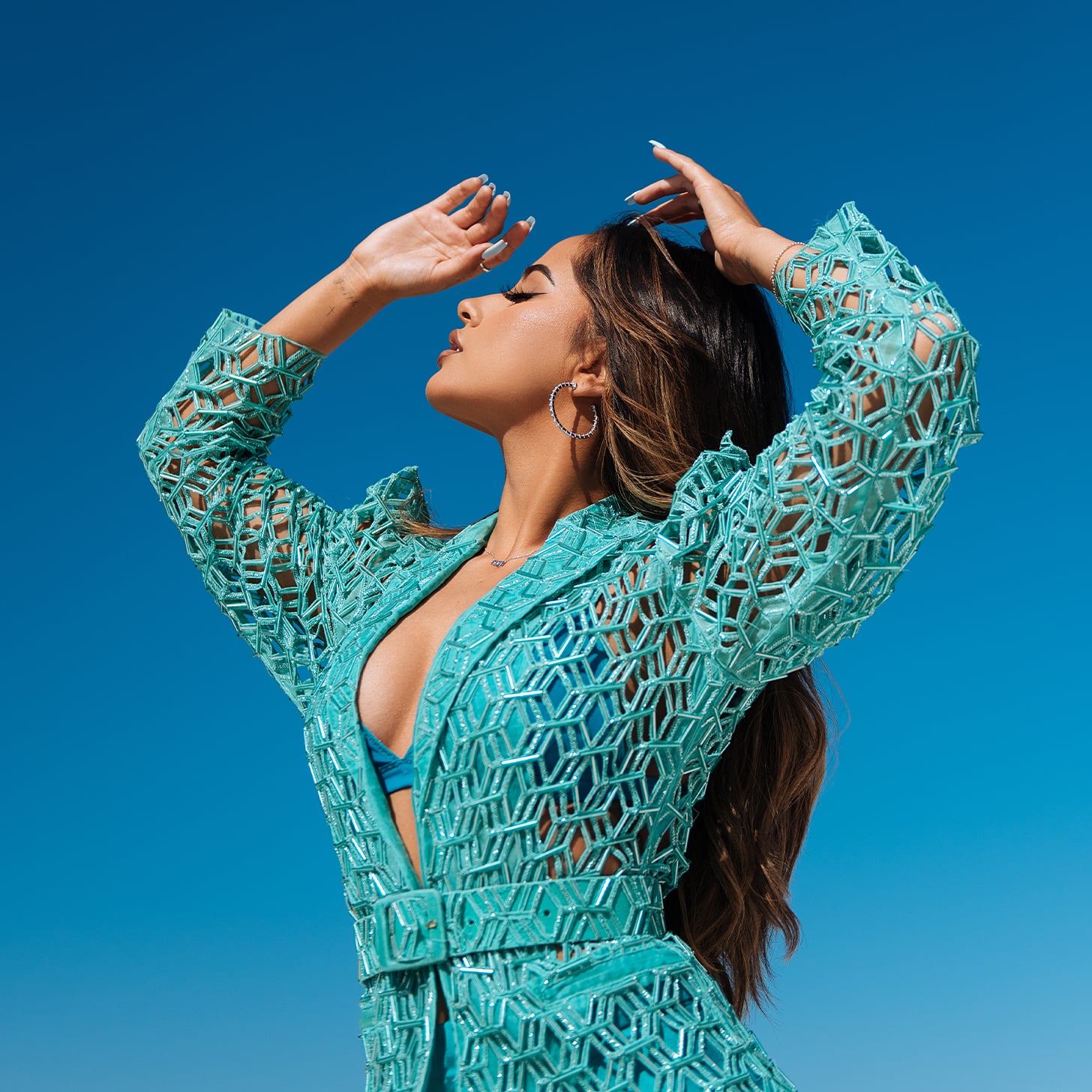 Just like it has for the rest of us, the pandemic has changed Becky’s world dramatically, but she’s finding silver linings. She’s been trying her hand at cooking and reconnecting with Sebastian. “I hadn’t been able to enjoy my apartment with my boyfriend like this, ever,” she tells me. “This is the first time we’ve had continuous time together to really just bond. I love it.” Despite the newfound downtime, Becky is still hard at work. She recently collaborated with Juhn, Lenny Tavarez, and Dalex for “Otro Día Lluvioso,” teamed up with Pitbull and De La Ghetto for “Mala (Remix),” and dropped a sunglasses collection with Dime Optics, but her biggest priority right now is mobilizing her legion of fans to vote.

Becky has no doubt that this year’s election is critical, and there’s a sense of urgency in her voice as our conversation turns to politics. “Especially as a Latina woman, a woman of color, I got to step up,” she explains. The 2016 presidential election marked the first time then-19-year-old Becky officially exercised her right to vote. She recalls the weight of the responsibility hitting her as she stood in the voting booth. “I didn’t realize how much pressure I was going to feel when I was standing right there and looking at the ballot,” she says. “There were so many things I didn’t recognize. At that moment, I realized I messed up and I never wanted to feel that way ever again.”

Becky made a promise to herself to do better. “Educating myself on these things was the best thing that I could have done, because I think putting your pride aside and saying, ‘I don't know,’ is something that’s really hard for this generation.”

For Becky, the granddaughter of Mexican immigrants, voting is “a very personal thing.” Even though her grandparents are now US citizens, the experiences they’ve shared with her about being deported and having troubles with their visas have stuck with her. “The sacrifice, the scary stories that they shared of what it was like to live as immigrants in this country, it just made me realize this one thing that I do have. I’ve got to do this for them,” she says. “I’ve got to do this for the countless other individuals who maybe don’t have this right to vote.” 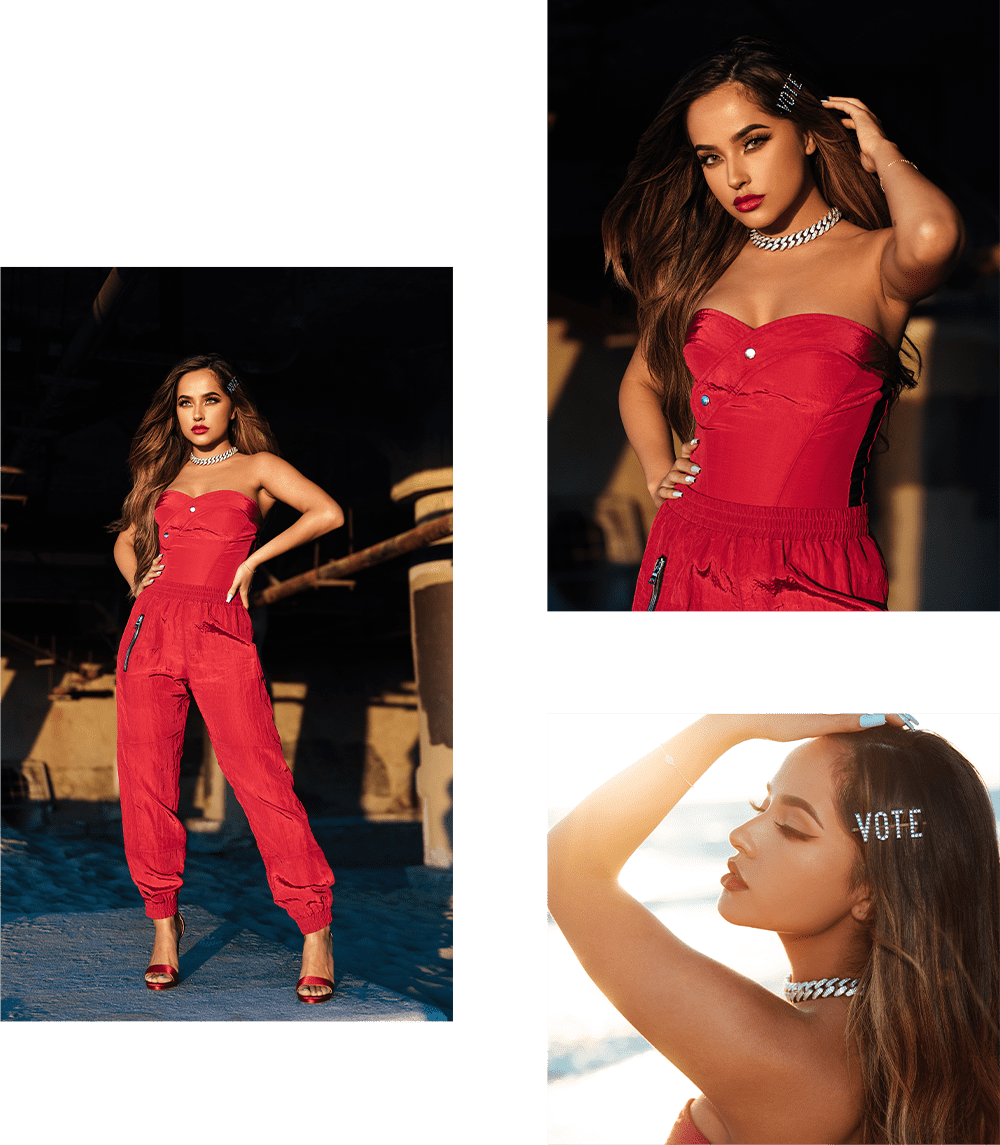 When I ask Becky what she hopes to achieve with her vote this time around, her message is loud and clear. “What I’m trying to accomplish is to have people recognize that juntos somos más; we are so much more powerful when we come together,” she says, sitting up a little straighter. “Some people just think about who they’re voting for because of how it’s going to affect their taxes. I’m sorry, but where is the human side of anyone when they’re thinking about how it’s going to affect their bank account rather than how it’s going to affect children who are in cages, or what’s happening with human trafficking, or what’s happening with our education system, with our healthcare system?”

While Becky doesn’t specifically reveal whom she plans to vote for come November, her sly smile and frustration tell me we’re on the same page. “I’ll just say that the last election, when that final announcement was made, I’ve never cried so much out of just genuine fear,” she says, before stressing: “Get out there and vote! Get your friends to go out and vote, your tíos, your tías, your abuelitos, everybody!”

Voting is obviously only one piece of being politically active, but what about the people who can’t vote, whether it’s because of their age or immigration status? How can they get involved and shape the world they want to live in? “Use the power of social media — following activists who have dedicated their lives to certain areas that interest you or that move your heart, whether it’s immigration, the Black Lives Matter movement, or education,” Becky replies. “But there’s even a simpler thing that you can do, which is to just be a good person.”

Becky is no stranger to taking a public stand; she frequently uses her own massive platform to speak out against inequality and raise awareness on social issues, including Black Lives Matter and DREAMers, and has made it a point to give back to her community along the way. In an effort to support her local community during the pandemic, Becky sold a limited-edition charity T-shirt and donated $20,000 of the proceeds to support the LA Students Most in Need Fund. She also collaborated with Amazon to donate $20,000 in supplies to her former school, Oak Street Elementary, as well as another $10,000 toward the purchase of headphones for Los Angeles Unified School District students.

“I’ve always felt that my job is so much more than to just shut up and sing,” she tells me. She has seen her hometown of LA become an epicenter for Black Lives Matter activism and knows that change is long overdue. “I just think that this is what sick and tired looks like,” she says of the protests, which she sees as part of a larger, interconnected push for equality and inclusion for all. “The truth is, once we all do come together, we are the majority,” she tells me, stressing the intersectionality young people are embracing in this moment. “Especially in a generation where we have access to social media at the snap of a finger, we can’t blame our lack of information as a reason to not act kind or act on injustice.” 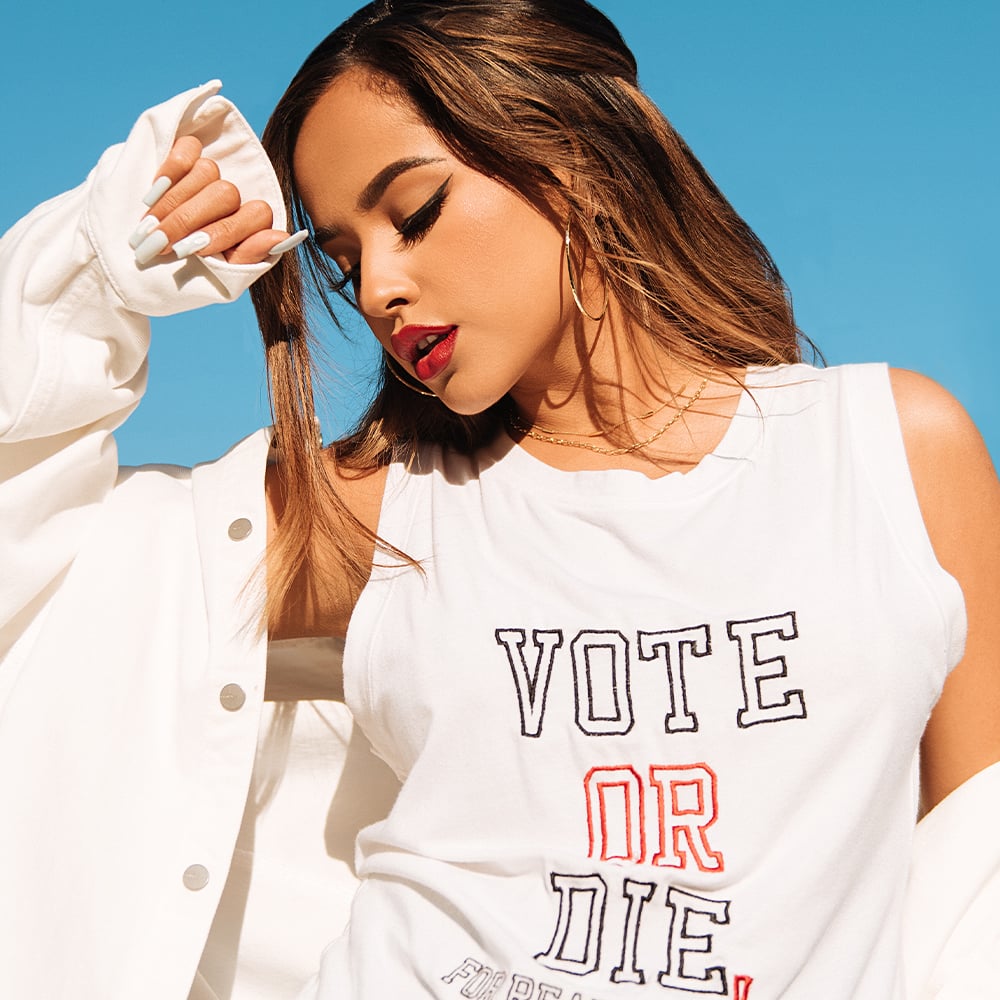 Becky’s journey to activism started at a young age when she was growing up in Inglewood, CA, a city in Los Angeles County where more than 92 percent of residents are Black or Latinx and more than 18 percent live below the poverty line, according to 2018 census data. Even as a child, Becky remembers being “so tuned in” to the inequality facing her neighbors and her own family. Her parents lost their home in the 2008 recession, and the family were forced to move into her grandparents’ garage. It was then that Becky realized her passion for music could be a way out in more ways than one: as an escape and an outlet for her own emotions, and as a financial key to help her family get back on their feet. She began uploading covers of popular songs on YouTube, which garnered millions of views. They included hits from Eminem, Drake, and Frank Ocean, but it was ultimately her rendition of JAY-Z and Kanye West’s “Otis” that got her signed to Kemosabe/RCA Records in 2011. “Communities like the one I grew up in are set up for kids to fail more so than they are for success,” she notes. “In a sense, [that] lit a fire under my ass to just be a big girl. I knew I wanted to show my younger siblings that nothing’s impossible, that even when life sits you on your ass, you can get back up.”

Becky has brought that same fighter’s spirit to her career — especially when she’s confronted sexism or been underestimated because of her gender in the Latin music industry. “There are a lot of beautiful things about our Latinx culture, but I also think that there are a lot of things that no longer serve us, which is machismo, which is how we perceive women owning their sexuality,” she says. “Just women working, period, is so unsettling for older generations. But I never really was fazed by it, to be honest. It was more fun to me to be like, ‘Alright, you’re trying to put me in this box, but now I’m jumping to this box, and I’m going to keep jumping to this box, to this box, and you can’t catch me. So what now?’”

Becky has also used her platform to challenge mental health stigmas in the Latinx community by being open and honest about her own struggles with anxiety and depression. She says seeking professional help and going to therapy helped her achieve “a whole new level of self-understanding.” Being Mexican-American myself, I know that mental health isn’t a topic that’s widely talked about in the Latinx community, and so does Becky. “In our culture, we don’t like to admit that we may not have the answers to something or that we don’t understand something,” she tells me. “I was having intense panic attacks. I was having speech anxiety, which, as you can see, I love talking, I’m very expressive, and I went through a period where I was not able to communicate . . . I realized that’s not OK. This isn’t OK. I really have to do the work.”

At 23 years old, Becky has already become one of the biggest Latinx superstars in the world, made history portraying the first openly LGBTQ+ character in a superhero movie with her role as Trini in 2017’s Power Rangers, and made her mark as a vocal social-justice advocate and I Am a Voter spokesperson. But according to Becky, this is just the beginning. “I’m just barely scratching the surface of all of the things that I hope to accomplish one day in my career,” she tells me. “I definitely want to continue pursuing acting . . . I would love to do a romantic comedy, because I feel like I’m just a goofy person, so I feel like it’d be fun to kind of explore that side as an actress.” (Um, Becky in a rom-com? Yes, please!) 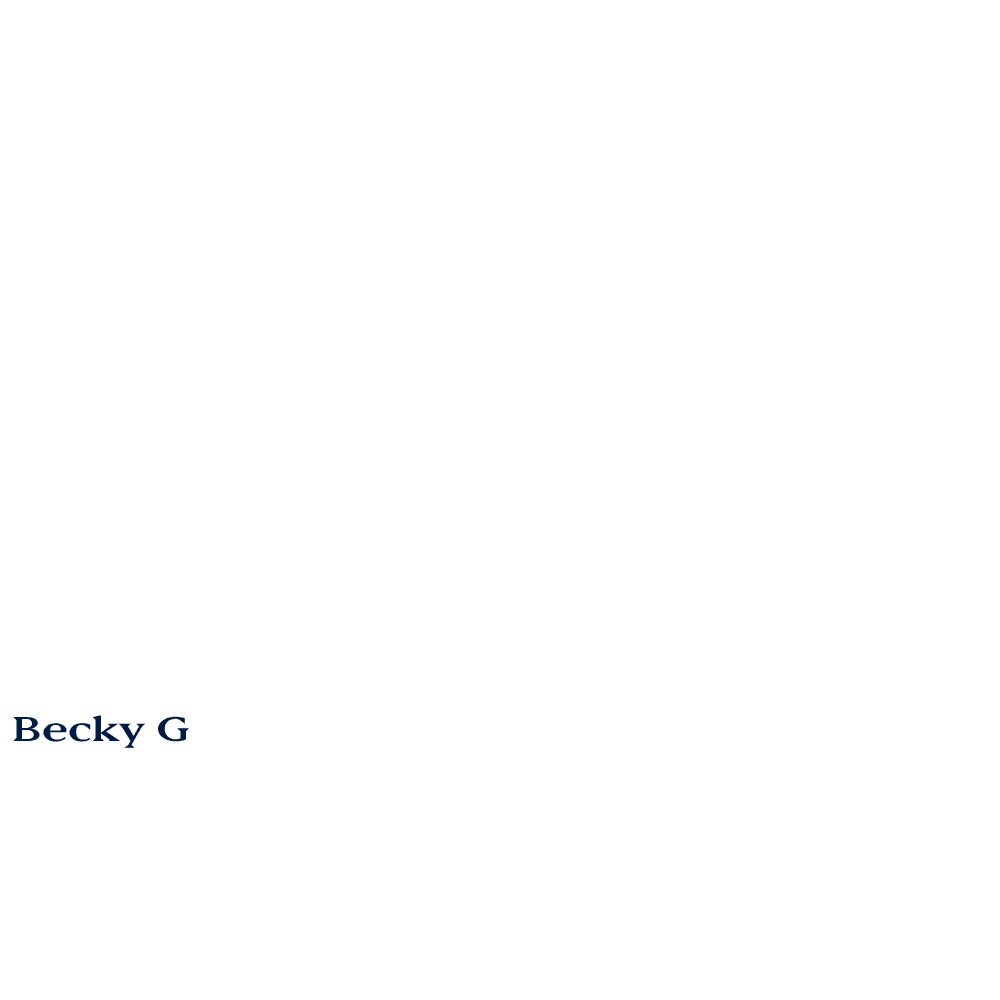 While the global pop star’s ambitions are without limit, tonight her plans are the kind any 23-year-old can relate to. After work, she’s kicking off her heels, and she and Sebastian plan to grab takeout from a local restaurant and relax at home. But once the sun comes up again tomorrow morning, you can bet Becky will be all business.

“Every day is a hustle for me,” she insists. “Every day’s like, ‘How can I continue to help my family? How can I continue to uplift others in my community?’ So [once] I can do that without losing sleep at night and getting canitas in my hair, then I’ll be like, ‘Alright, I’m good. I made it.’”

Text BECKY to 26797 to check your voter registration status and get election updates from I am a voter.