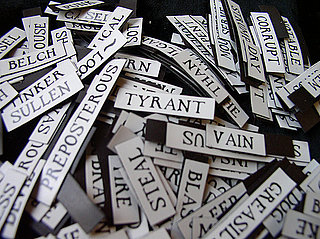 Should "tanorexia" really be added to the Oxford English Dictionary? Probably not, even though it's been submitted for possible inclusion. Like the words that define a decade, many neologisms that seem very important at the time could sound quite silly later.

Hence, Oxford's "vault" full of words submitted for possible inclusion but not deemed worthy for the dictionary. Says OED senior assistant editor Fiona Mooring, "They are simply words that we have not included in our dictionary up until this point because we have not yet seen sufficient evidence of their usage."

With words like "tanorexia" and "flashpacking" (sounds dirty, but it's not), I'm guessing this list might overlap with the 10 words Lake Superior State University chooses annually to be banned for "misuse, overuse, and general uselessness."

Want to see the 10 words in the vault that will probably never leave? Keep reading.

Apparently, once a word is in the dictionary, it's there for all eternity, so let's hope these stay in the vault. Which of these do you find most offensive?