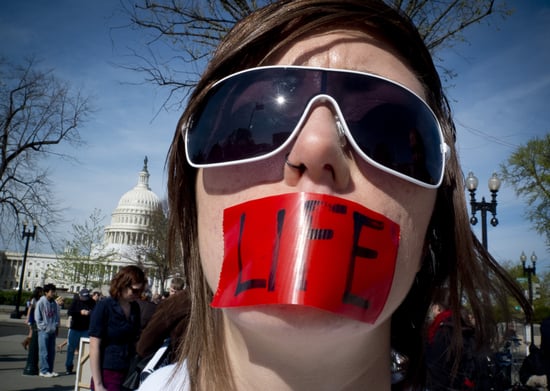 The draft of the official platform of the Republican Party has been leaked, and just like in previous years, it contains the Human Life Amendment, which would ban abortion without exception in the constitution. The amendment is meant to "assert the sanctity of human life and affirm that the unborn child has a fundamental individual right to life which cannot be infringed." This position doesn't differ from that expressed in the GOP platforms of 2000, 2004, and 2008. But this year it could get more attention. Let's look at the highlights (or lowlights).

Beyond limiting a woman's right to choose, this amendment could have a wider impact. It would also effectively criminalize some forms of birth control, IVF, and perhaps even miscarriages.

As it stands in draft form, the Human Life Amendment contains no exception for rape, but it still has to be approved by the entire platform committee today and by delegates next week. So it's possible that Mitt Romney could make good on his promise to not oppose abortion in instances of rape by tweaking the amendment, but not likely. Both George W. Bush and John McCain supported exceptions, but they did not insist on a change in the party's platform, perhaps hoping to appease social conservatives. Between the GOP's official platform and VP hopeful Paul Ryan's rigid stance on the issue, a vote for the Republican ticket in November could mean a vote for no abortion, period.