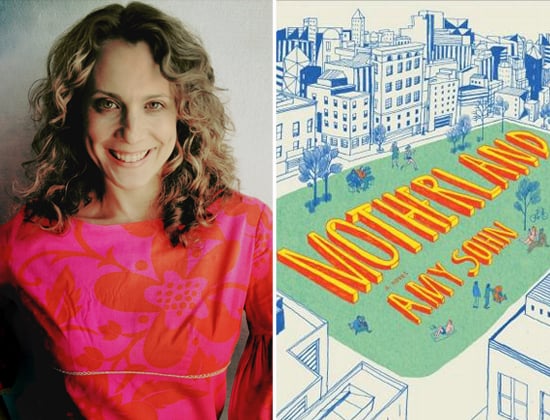 Following her 2009 hit, Prospect Park West, author Amy Sohn is back with a new book, Motherland: A Novel. Amy picks up with some of the same characters, but you don't have to be familiar with the first novel to follow along. Motherland chronicles the adventures of five parents living in Park Slope, Brooklyn, who often turn to alcohol and affairs to face their spouses and life goals after emerging from the black hole of raising an infant. "I really wanted to do something that was at the next phase of being a parent," Amy explains. "If a woman hasn't gone back to work, she might be realizing she's a little bit obsolete and a little bit redundant."

If you're not a mother, you might not expect a novel about motherhood to include passages about smoking pot, underground parties, and Grindr, the gay hookup mobile app. But this book is about parents living in Brooklyn after all. Amy, who raises her family there, still thinks her book captures the universal experience of American parents. Find out what she told us about motherhood, writing her new novel, and whether she's lost the friendships of fellow Brooklyn parents while writing about them.

TrèsSugar: Is it challenging to write about parents in Brooklyn as a parent in Brooklyn yourself?

Amy Sohn: There were always issues about writing about friends and privacy when mining my own life for material.

TS: Do your friends think you're writing about them?

AS: Some of them know that I am.

AS: That's the truth. This one woman says that the character Karen is based on her, and it's so funny because not only is she not, but she's not someone I know very well. It's gotten back through the grapevine that she was proudly telling people she was in the book.

TS: How do you think women find a balance between motherhood and having a life separate from their children?

AS: The ones who are really struggling are the ones who can't separate from the child, and a lot of times that leads to very poor discipline. I'm probably in the middle of those two extremes.

TS: So, a big part of the plot is infidelity.

AS: I think infidelity is more rampant than any of us know because women are very good at being private about their affairs. But yeah, infidelity is as old as marriage, right?

TS: Do you think the parenting experiences in the book are specific to New York or Brooklyn, or is it something that moms everywhere can relate to? Just keep reading for Amy's response.

AS: I absolutely think that this is in the culture and that it transcends class. You know, primarily Generation X is really struggling with these questions of self vs. the family. They don't want to make the same mistakes that their parents made because a lot of them had parents who had really bad and ugly divorces. We're the first generation that had really lived through 1970s divorces. Of course, that's going to change the way you think about your marriage and your kids. It will be really interesting to see the next generation. Now that Gen Xers are in their 50s, their children are getting married now. Are they going to go the other way? Are they going to go back to more of the 1950s model of child bearing and parenting? Or are they going to be even worse because there are no boundaries?

AS: So in terms of the relatability, what I hear from people, on book tour and just even occasionally going on some of the mothering message boards for research, are all of these questions. How do I discipline the children? . . . My life has become too child-eccentric . . . What baby seat do I buy? . . . How do I keep this spark in my marriage? I don't think these are unique at all to Park Slope or Brooklyn.

TS: How do you think people will react to this book?

AS: It will probably be controversial because of the sex, drugs, and rock 'n' roll in it. But I really hope that it makes people either feel incredibly grateful for the marriages that they have or feel not left alone in their struggles, whether it be with their partners, their children, or their neighbors.

TS: Is the sex, drugs, and rock 'n' roll version of parenting something you see around you in Brooklyn?

AS: On a day-to-day basis, it's very hidden. If you generalize it, women lean on alcohol, and there is a certain demographic of hipster guys that lean on pot. In your 20s, you're doing it very socially in a group scenario. And when you move into your married life and have kids, it's something couples do together or women do alone.

TS: What's next for you?

AS: I'm actually working on another novel. It is not set in Brooklyn, and the lead character is not a mother.

BooksWomenCelebrity Interviews
Around The Web

Music
Jhay Cortez Is Done Pleasing Everybody as He Prepares to Release His Most Authentic Album Yet
by Maria G. Valdez 11 hours ago