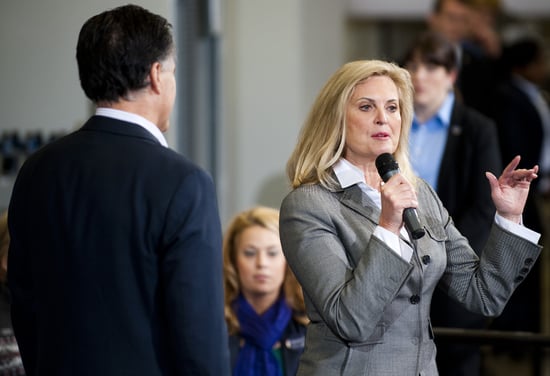 In an attempt to attract female voters turned off by his stance on Planned Parenthood, reproductive rights, and women's issues in general, Mitt Romney has been using his wife Ann Romney as his token woman for his campaign. When questioned about gender roles and the war on women, Mitt Romney continues to bring up Ann, recently saying: "My wife has the occasion, as you know, to campaign on her own and also with me, and she reports to me regularly that the issue women care about most is the economy."

But CNN pundit Hilary Rosen took issue with the idea that wealthy stay-at-home mom Ann is being used as an "expert" on working moms and women. On AC360 last night she said, "Guess what? His wife has actually never worked a day in her life. She's never really dealt with the kinds of economic issues that a majority of the women in this country are facing." These comments got Ann so heated up that she actually joined Twitter to defend herself, tweeting: "I made a choice to stay home and raise five boys. Believe me, it was hard work." And now it's a full-blown feud, with Hilary countering with a Huffington Post piece and Ann going on Fox News to talk about how being a stay-at-home mom is a career choice with its own challenges.

The problem that arises from this stay-at-home vs. the working mom debate is that it takes the focus off the real issue that spurred Hilary's controversial comment in the first place. Something she brings up again in her Huffington Post article. She writes, "Is Ann Romney Mitt's touchstone for women who are struggling economically or not? Nothing in Ann Romney's history as we have heard it — hardworking mom she may have been — leads me to believe that Mitt has chosen the right expert to get feedback on this problem he professes to be so concerned about."

Should Mitt Romney be using Ann to attract women voters the way that he has? Do you think Hilary was wrong to call out Ann in the way that she did? Weigh in below.