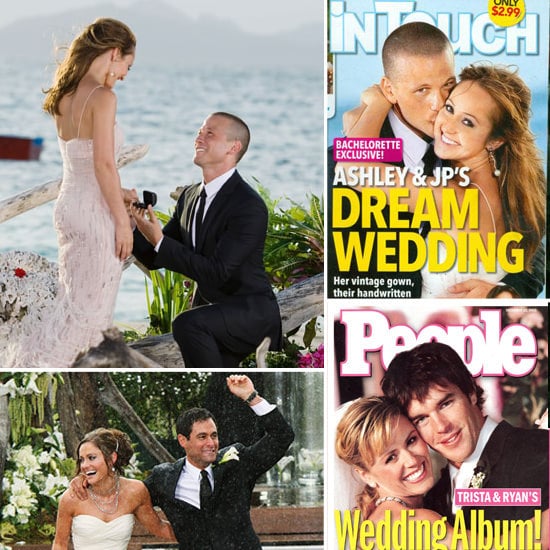 It's official! The Bachelorette's Ashley Hebert and her pick, JP Rosenbaum, will be getting married on TV this December, ABC announced yesterday. And they're only the third couple to do so in the franchise's history. Back in 2003, 17 million viewers watched Trista and Ryan Sutter tie the knot, and Molly and Jason Mesnick wed in front of cameras in 2010 amid a downpour, in true Bachelor drama. Ashley and JP, a construction manager, both said they wanted to hold off on wedding plans until Ashley graduated from dental school, and it looks like the right time is now. Although no specific details have been released yet, there's already a lot we can expect from the couple's big day!

Lavishness
If Trista and Ryan's wedding is any indication, there's going to be one word to describe the event: lavish. Their wedding cost an estimated $4 million, featuring food flown in from 14 different countries and lots of pink, Trista's favorite color. Ashley's been known to keep things simple and stray away from bold patterns in her personal style, so we might see more of a neutral color palette — although we won't expect anything less than chic from the bubbly bride.

Magazine Covers
Even before her wedding, Trista was featured on at least six national magazine covers, appeared on Oprah, and was the first engaged celebrity to make it to the cover of Modern Bride. Ashley's following suit, already making headlines about her "dream wedding."

Celebrity Guest List
Ashley and JP are keeping mum on who will make the guest list, but we can be sure to expect some fellow Bachelor/Bachelorette contestants. Ashley's close with the other girls who competed with her for Brad Womack's attention; she even recently took a trip to Mexico with season 15 ladies, including Ashley Spivey, Britt Billmaier, and Lisa Morrisey. We can also count on her siblings to be there — including her sister, Chrystie Corns, who famously dissed JP on the show and said he wasn't the one for Ashley. Trista invited Bob Guinea, a contestant on her season, to the wedding, but we're not sure Ashley will do the same with any of her exes.

Sweets
Trista and Ryan might have opted for a $15,000 chocolate wedding cake, but our guess for Ashley and JP's wedding dessert? Cupcakes. Who can forget the adorable moment the night they met when she said she was going to marry a man who called her cupcake and he told her that was his nickname at work? Plus, the always-fit Ashley has said one of her weaknesses is a red velvet cupcake.

Designer Dress
Ashley donned some stunning gowns on her season, and we bet it won't be any different on her wedding day. Trista wore not one, but two white Badgley Mischka dresses, one of which was estimated to cost $70,000. But Ashley, who's having her gown custom made, has already left us guessing, saying her dress will not be white.

A-List Entertainment
Famous artists have provided music at the past two TV weddings: country music superstar Brad Paisley sang a song inspired by words Ryan wrote shortly after he met Trista, and Molly's favorite singer, Gavin DeGraw, performed at her and Jason's reception. Given Ashley's love of dancing, we wouldn't be surprised if she brought out some of her own moves to steal the show.

Roses
No Bachelorette wedding would be complete without roses. Trista and Ryan had 30,000 pink and ivory ones flown in from Holland and Ecuador, 12 dozen of which had Trista and Ryan photos printed on each petal. Rose overkill is acceptable given the situation, just as long as we don't hear Ashley say "Will you accept this rose?" any more.

With all the wedding fun to look forward to, there's even more that viewers can expect: Ashley and JP's bachelorette and bachelor parties will be aired, too. How appropriate!

Celebrity News
Glee Star Jenna Ushkowitz Marries David Stanley: "We Got to Have the Day of Our Dreams"
by Monica Sisavat 4 days ago

by Alessia Santoro 17 minutes ago