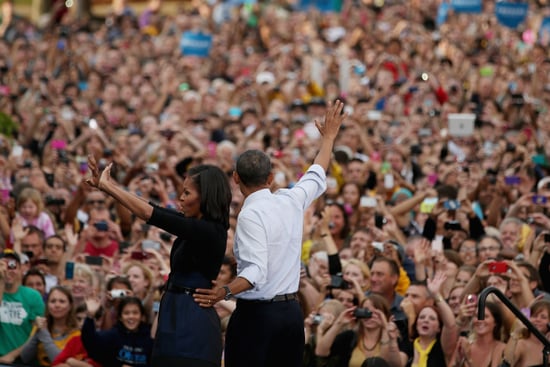 We're happy to present this excerpt of a story from one of our favorite sites, YourTango. Today Rajul Punjabi discusses the Obamas as relationship role models.

As an independent 20-something, I want a marriage like the Obamas or I don't want one at all.

Talk is cheap, which is why political speeches have never really been appealing to me. However, Michelle Obama's speech during the Democratic National Convention really got me thinking. Not so much about taxes, health reform, and the election, but about love. So here, I declare my radical political stance: Barack and Michelle have my dream relationship. Their actions, words — and even their innuendo — have built my standard of what makes for a healthy and enduring marriage.

As the first lady stood up there telling a story about life as a newlywed with Barack ("We were so young, so in love, so in debt," she blushed), I sank into the couch mesmerized. It was the first time in a long time that I'd heard the term "so in love" without wanting to roll my eyes.

As a single, late-20-something New York City woman, the idea of marriage has never thrilled me. Wedding bands have always seemed like diamond-studded baby boas to me, constricting in a slick and deadly way. The idea of waking up to the same person every single morning, and every day turning into a routine makes me want to inflate my life vest and jump ship. Even some couples who have been dating for a long time make me uncomfortable with their "we-ing." "We Summer in the Hamptons," or "We watch way too much reality TV." Is this what happens when you fall in love? Two previously cool people melt hopelessly into one very vanilla fusion that stays at home on Saturday nights to watch Real Housewives reruns?

For the rest of the article, head to YourTango: How Barack and Michelle Obama Restored My Faith in Marriage.