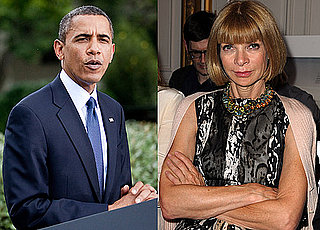 If you have $30,000 you could eat dinner with Barack Obama tonight at famed Vogue editor Anna Wintour's New York townhouse. Well, probably not.

The security-heavy event already has the streets surrounding the West Village house blocked off — even people who live there will need ID and proof of residence to return tonight. Guests at the fundraiser for the Democratic National Committee will be a mix of wealthy, former Hillary Clinton donors and longtime President Obama supporters, like Wintour, but the guest list is about as secretive as Chelsea Clinton's wedding.

Of course, the Republican Party is using it as an excuse to eviscerate the president for keeping elitist company with a press release titled "The President Wears Prada." But even a president needs to eat — and raise millions.