It seems like teens are much more educated about sex these days (we can thank the Internet for that), but there's nothing worse than hearing all the terribly inaccurate advice young women are still being fed. Our friends at Thought Catalog have come up with 15 first-time fabrications we as a society need to stop allowing women to think are true. 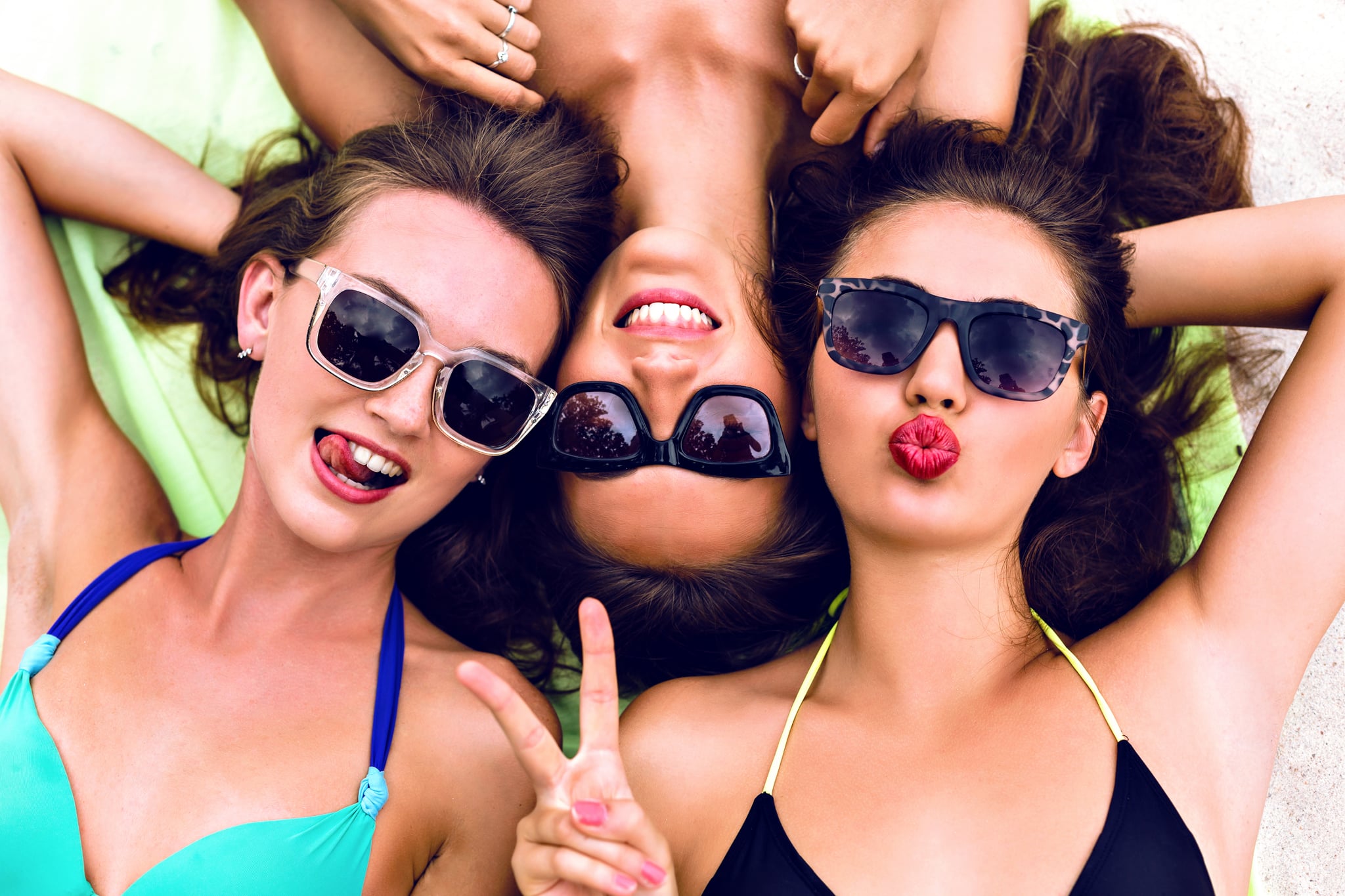 I was f*cking terrified to have sex the first time around, largely because my friends (and every coming-of-age movie I watched/women's magazine I read), told me it would, inevitably, hurt like a b*tch. I'm not saying that many women's first time isn't painful — I'm saying that, if it is, that's not because our anatomies are against us or because we're fated to some cruel, aching loss of our **virginity** . . . it's because those women don't engage in the proper foreplay to be appropriately lubricated for the act. For real, girls — your first time DOES NOT HAVE TO HURT. The guy you do it with just has to spend some time getting you wet enough for you to enjoy his penis being inside of you — otherwise, he's putting you at risk for some miserable chafing (and a UTI).

P.S. The reason girls overwhelmingly believe that their first time will be inescapably painful is, no doubt, because our society doesn't teach men to treat women as equal sexual partners whose pleasure is just as important as theirs, such that the woman's pain just kind of "comes with the territory." Well, it shouldn't, and it's bullsh*t.

If you're giving head, you should be getting head. Period.

5. "Sex is what happens when a man loves a woman."

. . . Sometimes. But it also happens when a woman loves a woman, when a man loves a man, and when a woman kinda likes a man, too. It's 2015, y'all — sex isn't just for married, heterosexual couples anymore. It's (hopefully) fun, it's not always pretty or perfect, and it happens between all different kinds of people. And that's beautiful.

7. "Your period is embarrassing and gross."

LIES. Your period is a natural, necessary, categorically not-nasty thing — make no apologies for it, and politely tell any guy who gets all huffy and repulsed when you tell him you're on it mid-hookup to go f*ck himself. :) Like, for real dude, go f*ck yourSELF, because I'm not interested.

We need to start telling girls to IGNORE all the stupid talk about vaginas being scary, gross, stinky creatures — they're simply not. In fact, your vagina is naturally pH-balanced, which means it's self-cleaning and DOES NOT require Summer's Eve latest patriarchy perfume cleansing wash. It's f*cking gorgeous, and that's that.

9. "If you're having sex, your vagina should be hairless."

I recall many a ninth grade pube convo arriving at the conclusion that I "had to" shave/wax my vagina to resemble that of six-year-old's because "guys like it better that way," so I did — I undressed that b*tch and left her naked. But girls of the world, THIS IS A PUBLIC SERVICE ANNOUNCEMENT: F*CK THA POLICE, AND ROCK THEM PUBES. I don't care if you think you *actually* prefer a hairless vag — you don't. Society/the media/your dumb*ss friends inform all of your "natural" preferences—if it wasn't for Brazilian bikinis and pop culture's lauding of the "clean and bare" look, your 15-year-old self wouldn't've been so inclined to strip your vagina of all its pubic hair, and your 25-year-old self wouldn't currently be so inclined to keep that arduous, expensive, painful practice up.

Wrong. Pubic hair serves a purpose — it protects our genitals from friction-induced lacerations that suck up nasty bacteria and other unwanted pathogens, and, perhaps more importantly, it traps pheromones, those chemical substances we produce to affect the behavior/physiology of other humans . . . in this case, to release the scent of those adolescent hormones your body waited so long to produce, which — whether or not it's consciously noticed/smelled by your sexual partner — ultimately attracts *mates.* Long story short, pubes help you stay clean, heathy, and smelly (in a sexy way).

Oh no, it ain't! It's due time to dispel some of the paranoia re: how easy it is to get pregnant (a fear that'll shift real quick if/when you're actually trying to get pregnant and realize how difficult it can be). I DO NOT mean to encourage any unprotected, silly sex here — no matter if you've known him for a night or a year, you should employ the necessary contraception(s) whenever a penis enters your body, assuming you're #teamnobabies and/or #teamnoSTIs. That said, though, it's really not as easy to get pregnant as all the hype suggests. To be perfectly clear, there's only one week during your cycle when ur eggo can get prego, comprised of the five days that precede ovulation, *OVULATION DAY,* and the 24 hours that proceed it. For women with "regular"/predictable cycles, these "fertile" days occur between 12 and 14 days before their period starts; however, this window may be different for women with "irregular"/unpredictable cycles. And even if you have (unprotected) sex while you're fertile/ovulating, it's still pretty difficult to get pregnant; according to WebMD, for most couples who are actively trying to conceive, the chances that the woman will get pregnant during any given month are somewhere between 15 percent and 25 percent.

If you're going to be over-cautious about something, that something should be contracting an STI — not an accidental pregnancy (Roe v. Wade went down almost half a century ago, y'all . . . there's a cure for that, and ain't nothing shameful about it). I don't want to stigmatize anyone with an STI; if you have one, you're certainly not alone—about 1 in 4 Americans carry an STI — unfortunately, sh*t happens. And the good news is that STIs — especially when caught early by that yearly pelvic exam EVERY WOMAN SHOULD GET — can be treated, but not all can be cured. Genital herpes, for example, can be treated in order to relieve its symptoms, but outbreaks may occur throughout the carrier's life — in other words, it can't be cured.

While condoms may reduce your risk of contracting genital herpes by half, they don't eliminate it; you probably know that you can catch it via oral sex (remember, HSV-1, or the cold sore virus/oral herpes can be transmitted to the genitals) and intercourse, but what you may not know is that you can also catch it via skin-to-skin contact on sites where the virus diffuses — the genitals and the inner thigh and anal areas. This isn't to say "f*ck ur condom" — please, don't f*ck it, use it! Just also be careful to pass on any sexual contact during visible flare-ups and to get tested regularly, because unfortunately, our physiology makes us more susceptible to the virus than men (just our luck, I know).

You are NOT contractually bound to see any hook-up to its "finish" — if something starts to hurt or if you grow uncomfortable with any sexual act for any reason, you should stop. If you're in pain and feel bad/awkward about interrupting ~the mood~, think about it this way: I guarantee you that dude would pull out the moment his penis started to feel like it was on fire, so if your vagina starts to burn (et cetera), don't think twice about pausing. Good sex is about equality — don't hold your tongue because you're afraid of hurting his feelings or seeming like a prude. This sh*t ain't all about him, babe. Seriously.

Advice
Need Help Adulting? The Realworld App Covers Everything You Usually Call Your Parents For
by Maeve Reilly 1 day ago

Relationships
I'm Social Distancing Away From My Partner, and I Have No Idea When I'll See Him Again
by Olivia Luchini 6 days ago

Healthy Living
I Started Stretching Every Night With My Partner, and Even Our Relationship Is Stronger
by Jada Welch 5 days ago