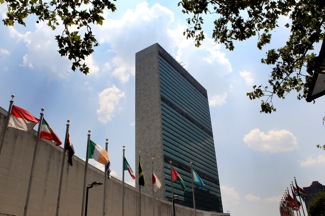 Legal gay marriage and a female president might lead you to believe that Argentina is a progressive beacon, but according to a new report from Human Rights Watch, women in the country have inadequate control over their reproductive health. The report "documents the many obstacles women and girls face in getting the reproductive health care services to which they are entitled, such as contraception, voluntary sterilization procedures, and abortion after rape." Barriers include long delays, unnecessary referrals to other clinics, demands for spousal permission contrary to law, financial barriers, and outright refusal of care by medical providers.

One commentator for the Guardian says the new report highlights why the UN needs to get serious about establishing its women's agency. The hope is that "UN Women" could do for women what UNICEF has done for children of the world. Although the female-dedicated agency was approved in 2009, political concerns have prevented the development of UN Women.

What's so controversial about an agency that will promote women's rights and work toward gender equality? Find out more after the jump.

Progress for women means radical change in many UN member nations. Members of the Group of 77, which includes the world's developing nations, have dragged their feet about the agenda and reach of the agency.

And of course, there's the issue of money. UN Women needs $1 billion just to start, and the historical underfunding of women’s issues might doom the agency's effectiveness. So far, governments have pledged $500 million, so we're halfway there.