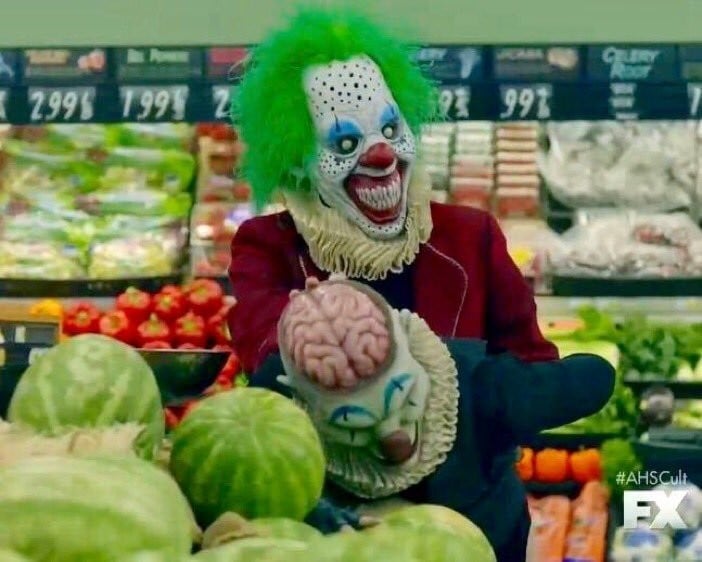 Hold Up! We Need to Discuss the Creepy Clowns Having Sex on AHS: Cult

Ryan Murphy has officially blown my mind. Each season of American Horror Story features at least one jarring moment that will scar you for life, but just when I thought I'd seen it all, Murphy had yet another twisted idea up his sleeve for season seven. In the first episode of AHS: Cult, we see two clowns having sex in a supermarket next to watermelons. Full on and full throttle. And yes, it's as insane as you would expect it to be.

As the episode progresses, we discover that Ally may or may not be hallucinating about seeing these creepy — and evidently horny! — clowns. So that leaves us to wonder if everything we're seeing is based on Ally's extreme fear of clowns manifesting in a way that makes her believe she's seeing clowns performing lewd acts in public . . . or if those were really clowns getting their freak on in real life. We're not sure which is scarier, but hopefully we'll get some answers soon. Read on to see some of the best (and funniest) reactions to all of the clown sex this season.

Nick Jonas
SNL Is on a Mission to Ruin Our Childhoods, and Now It's Sullied Cinderella
by Mekishana Pierre 6 hours ago