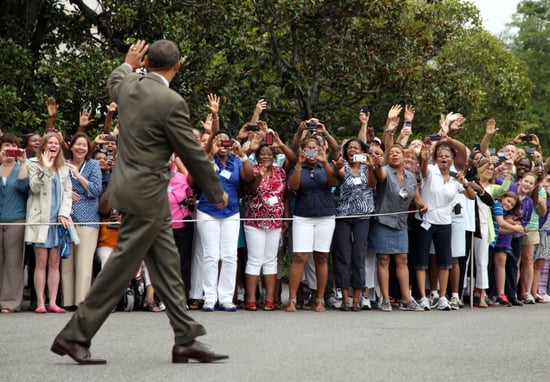 The Democratic National Convention came and went in Charlotte, NC, during which the party's official platform was released with (as expected) quite different stances on women's health issues and gay marriage than the GOP platform. While Mitt Romney's Republican platform is against gay marriage and civil unions and makes no exceptions for abortion, even in cases of rape or incest, see what the Democratic platform has to say about these issues and more below:

This is the first time the Democrats officially state in their party platform that they support legalizing same-sex marriage. According to the platform, the party members support marriage equality and "the freedom of churches and religious entities to decide how to administer marriage as a religious sacrament without government interference." They oppose "federal and state constitutional amendments and other attempts to deny equal protection under the law" to gay couples.

The party continues to commend Obama's Affordable Care Act, which includes copay-free birth control for women, while adding that "Democrats will continue to fight for a strong health care workforce with an emphasis on primary care." The platform promises to "refuse to go back to the days when health insurance companies had unchecked power to cancel your health policy, deny you coverage, or charge women more than men."

Democrats support "a woman's right to make decisions regarding her pregnancy, including a safe and legal abortion," and their platform reiterates their unequivocal support of Roe v. Wade, as well as stating they will stand up against those wanting to defund Planned Parenthood. It adds, "Abortion is an intensely personal decision between a woman, her family, her doctor, and her clergy; there is no place for politicians or government to get in the way."

Other notable sections include arts funding, which the Democratic party is for, saying it will continue to support public funding of arts programs. Romney believes these types of programs should be cut from the budget. Also, this is the first year that both party platforms have included a section on Internet freedom, with the Democratic one stating that "the Obama administration has led the world to recognize and defend Internet freedom — the freedom of expression, assembly, and association online for people everywhere — through coalitions of countries and by empowering individuals with innovative technologies." The Republicans used their party platform to push for less government regulation of Internet and tech companies.