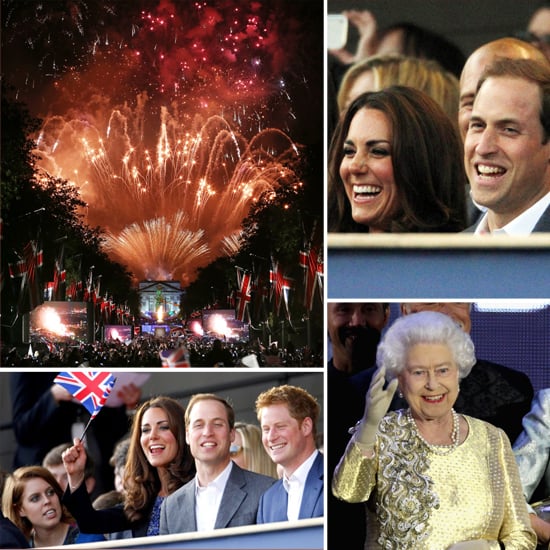 Today, commoners, Queen Elizabeth, and pop royalty gathered at Buckingham Palace for the BBC's Diamond Jubilee concert at Buckingham Palace to celebrate the monarch's 60 years on the throne. Unfortunately, in the midst of her Diamond Jubilee Central Weekend, the queen is dealing with some trying circumstances, as her husband, Prince Philip, the Duke of Edinburgh, was rushed to the hospital today with a bladder infection. Locals told BBC they feel for the royal couple, especially since Prince Philip will no longer be able to attend the rest of the Central Weekend events that include today's concert and tomorrow's service and carriage ride.

But the show must go on, and the queen still attended the Diamond Jubilee concert today (with earplugs in!) along with young royals Prince William, Kate Middleton, Prince Harry, Zara Phillips, and Princess Beatrice. The star-studded event kicked off at 7:30 p.m. London time, and the public and royal family members alike — 12,000 people in total — jammed to music by Elton John, will.i.am, Paul McCartney, Stevie Wonder, Kylie Minogue, Robbie Williams, and more on a stage built around the Queen Victoria Memorial in front of Buckingham Palace. Before the firework celebration ended the evening, Prince Charles introduced his "mummy," as he called her, and gave a touching speech in her honor. See the concert festivities now!