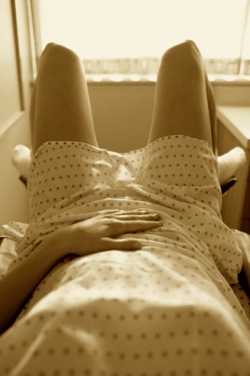 DIY isn't a term I like to associate with my health — I'm cool with a DIY manicure, but when it comes to something as important as screening for cancer I'm not doing it myself. After an online pharmacy in the UK launched new DIY pap smear tests that screen for cervical-cancer causing HPV, medical professionals are cautioning women against them. But the reasoning is a little counterintuitive.

Some experts say young women should not test themselves because the tests have a pretty good chance of coming up positive. It gets more confusing. While the positive HPV-test will likely be correct thanks to the high-prevalence of HPV, these doctors say it's better for women not to know so the sexually-transmitted infection has a chance to clear up on its own. Thus, the problem is not with the DIY nature of the test, but with the fact that it would lead to women getting tested more regularly.

I followed the recent, and controversial, updated guidelines from the American College of Obstetricians and Gynecologists, which suggest women wait two years between pap smears, so I'm not surprised by this advice. Still, it's hard to wrap my head around the less is more approach to preventative care. What do you think?

Healthy Living
No, There's Nothing Magnetic in the COVID-19 Vaccines — Experts Debunk Misinformation
by Samantha Brodsky 6 hours ago

Healthy Living
Is It Really OK to Have Sex While Wearing a Menstrual Disc? We Asked a Gynecologist
by Victoria Moorhouse 1 day ago

Healthy Living
Nervous About Removing a Menstrual Disc? Keep These 5 Tips in Mind
by Victoria Moorhouse 2 days ago

Healthy Living
Water Retention Is a Normal PMS Symptom, and It Might Be Behind Your Bloating
by Victoria Moorhouse 3 days ago