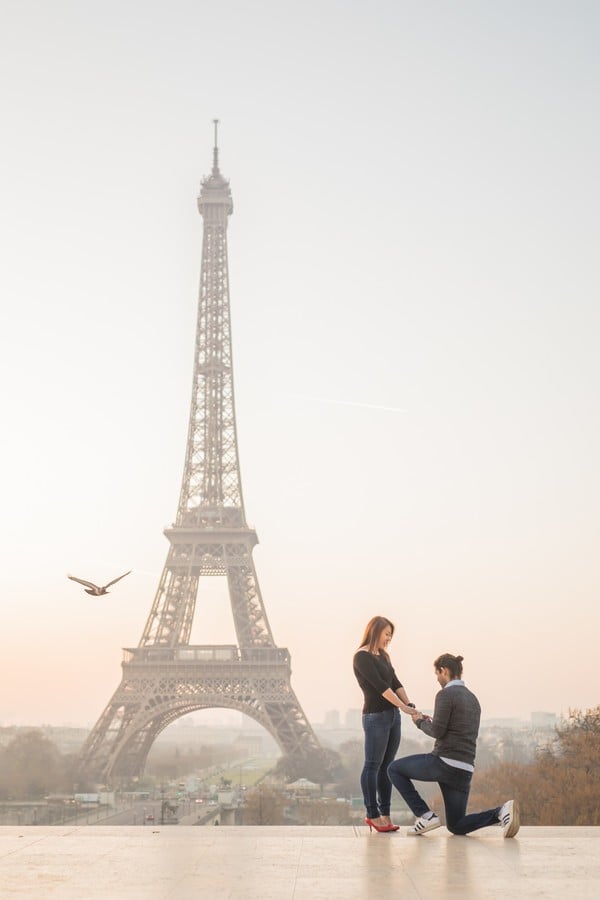 Melissa and Vishal met and started dating in Singapore; however, there is a twist in the story: when the couple met, Vishal was in the middle of a big move to Poland. But they really liked each other and decided to not let the distance get the best of them. Besides, the two are huge travel junkies and during the course of their relationship they visited a range of countries including Indonesia, India, Poland, Germany and Czech Republic where they created lovely memories and embarked on spectacular adventures.

It only made sense that this pair of globetrotters got engaged in an international location, and Paris is the pinnacle of romance. So it was fitting that this was the place where the Vishal popped the question, and photographer Pierre was there to capture the moment. "When we decided to get some photos taken in Paris I contacted Pierre 'in secret' a couple of weeks earlier and told him about my intentions of proposing and wanting it to keep it as a surprise", said Vishal.

However, Vishal was not the only one with a few tricks up his sleeve, and, boy, was he in for a surprise! "I had a gut feeling he had planned something," said Melissa. "Besides saying yes to him, I also wanted to let him know that I chose him, and I also wanted to ask him to be mine for life." So, Melissa bought a titanium ring and had her own counterproposal after she said yes to Vishal.

It was a marvelous day and the photos are absolutely beautiful, just like the story behind it, so make sure to check them out!

Related:
This Wedding Photographer Shared His Favorite Shots, and They Will Take Your Breath Away
0
previous images
35
more images
Previous Next Start Slideshow
RelationshipsWeddingFranceProposalParis
Around The Web

Relationships
Staying Home Separately, This Boyfriend Comforted His Girlfriend With an Original Song
by Kelsey Garcia 22 hours ago

Relationships
Someone Made a Video Showing What Couples Are Like in Quarantine: "Get Out Right Now!"
by Chanel Vargas 1 day ago

Fashion News
Here's What It's Like to Try On a Virtual Wedding Dress, Straight From a Bride-to-Be
by Sarah Wasilak 4 days ago

by Maggie Ryan 18 minutes ago