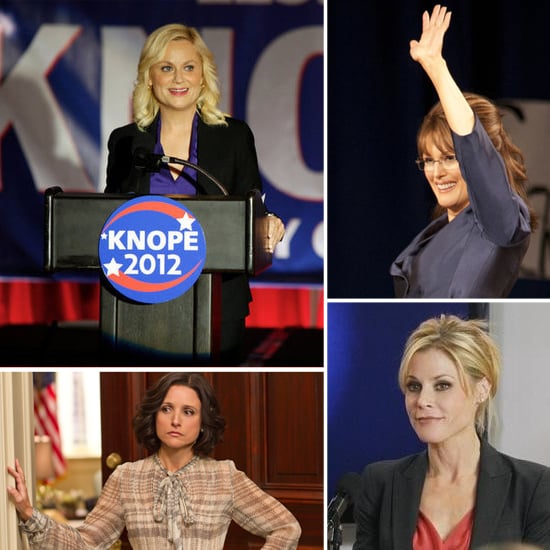 Tonight is the Emmy Awards, and the nominees include a number of fictional female politicians. Both Amy Poehler and Julie Bowen are nominated for their characters — Amy as Leslie Knope on Parks and Recreation and Julie as Claire Dunphy on Modern Family — who campaigned for office last season. Julia Louis-Dreyfus is nominated for her role as US Vice President Selina Meyer on HBO's new show Veep. And nominees Julianne Moore and Kristen Wiig have both portrayed real-life politicians, with Julianne playing former vice presidential candidate Sarah Palin in the made-for-TV film Game Change and Kristen's SNL skits as Congresswoman Michele Bachmann.

These ladies are a part of the growing group of female politicians on TV and in films, a trend we're happy to see, especially this election year. Big-name actresses have been getting in on the political parts with Meryl Streep reigning the 2012 award season for her portrayal of former British Prime Minister Margaret Thatcher in The Iron Lady and Sigourney Weaver playing a Hillary Clinton-inspired first lady turned secretary of state on USA's new show Political Animals.

Over the years we've seen everything from serious dramas to lighthearted SNL skits feature women in political positions, and we say keep it coming! The more comfortable we as a country get seeing women as vice presidents and presidents on screen, the more likely it will become a reality. So before we find out which women win the Emmy vote, let's look back at the imagined and real female politicians on TV and in film over the years. Then let's put a woman in the White House for real!