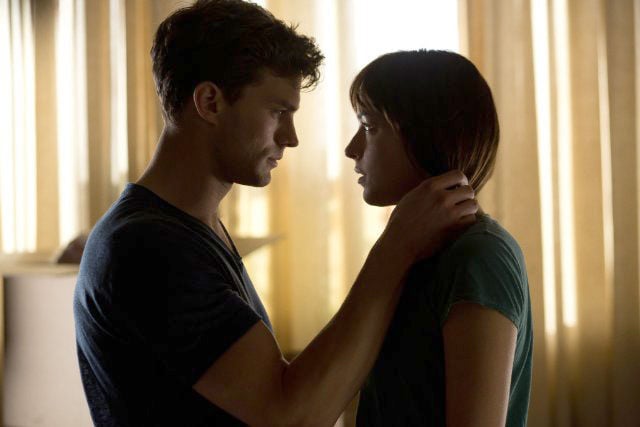 That's right — I am your feminist killjoy friend who finds problems in your favorite shows, movies, and books faster than you can say "f*ck the patriarchy." I cringe at the missteps that even female-led comedies like The Mindy Project and New Girl sometimes make, and when it comes to how women are written and portrayed, I both intentionally and involuntarily overanalyze most things to the point of exhaustion.

And I didn't hate Fifty Shades of Grey. I even liked it a little bit. Take this with a huge grain of salt and bear in mind that I have not and will not read the books, from which I know most of the accusations of abuse and domestic violence arise. Still, in part because of the huge amount of backlash around the movie, I think I expected it to be so extremely issue-ridden that all of the polarizing views would be justified. Sadly, for women and for the world, Fifty Shades hovers quietly on the line that nearly all TV shows and movies straddle — the one that is blurred by the portrayal of women as objects incapable of actual thought, or as damsels in distress needing to be saved, or worse still, the line often crossed that mistakes abuse and control as something that's sexy or desirable. The point? Many — no, most — of the aspects of Fifty Shades that people have found so problematic are not a far cry from ones easily found in some of their, and your, favorite films.

The movie has its admittedly adorable rom-com moments, paired predictably with cringe-worthy one-liners that make it all the more similar to the plethora of simple and sweet love stories churned out for the big screen. Not complaining, just sayin'.

Christian's behavior in the final scene is controversial, but also mildly unsurprising based on the buildup throughout the movie. Basically, Christian — presumably because of his ambiguously screwed-up past — takes the BDSM one step too far when, after a bad day, he whips Ana repeatedly. Ah, here the (more blatant) abuse rears its ugly head. NOT GOOD. But I honestly can't complain about how Ana responded. One more time, everyone, still haven't read the book. In the movie, she basically gives him a really big "screw you" and leaves, saying she can't do the relationship anymore. He calls after her, and she shockingly does not fling herself back in to his arms at his pleas. Instead, she looks him dead in the eye, and with more emotion than she has managed to muster throughout the film, firmly says, "no" and leaves. End scene.

All I am saying is that to single out Fifty Shades is pretty hypocritical of the people sitting down to watch the same sh*t on a daily basis, even if what they're watching is undeniably more well-written or masked as something more. At best, it simply falls in line with the mass of melodramatic and mildly entertaining formulaic slush that's a guilty pleasure for most of us — myself included. I mean, c'mon, it's two hours of extremely attractive people going at it — who actually hates that? Plus, from where I stand, Ana owned her sexuality in many ways throughout the movie. What we should be doing instead of focusing on one movie in particular is looking at the bigger picture of the culture of sexism, domestic violence, and abuse we live in. And everyone should brush up on their BDSM, because Fifty Shades? Not really portraying it. It's supposed to be enjoyable people, not just endurable.

My takeaway? The soundtrack is killin', and ropes have some diverse and interesting uses.

Holiday Entertainment
From "Spirited" to "The Muppet Christmas Carol," We Ranked 10 Scrooge Movies
by Victoria Edel 9 hours ago