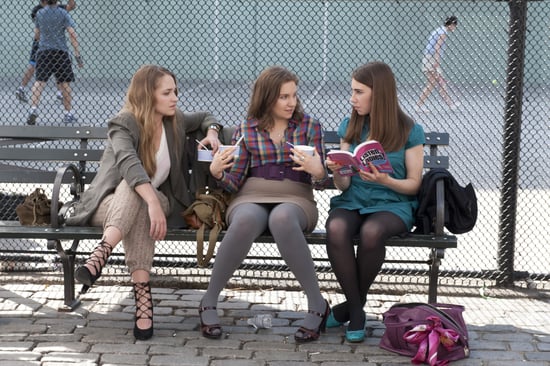 Last night was the second episode of Lena Dunham's new HBO show Girls, and the entire plot of the episode — fittingly titled "Vagina Panic" — centered around Jessa's impending abortion. Jessa dropped the bomb at the end of the Girls premiere that she was back in New York because she was pregnant, so it was a bold move to start off the second episode with Hannah announcing matter-of-factly that her day's activities included taking Jessa to the abortion clinic. When Hannah tells her "boyfriend" that she doesn't know if abortions should be a big deal, he accuses her of being too blasé regarding them (which is ironic, since he doesn't take things like condoms and STDs seriously). And later Jessa tries to blow off the procedure when talking to Hannah, but when she brings up how she wants kids in the future and how she'll be a great mom some day, it's clear that she's more nervous about it than she wants her friends to know she is. She even avoids the procedure altogether by having a drink at the bar (and hooking up with a guy) while all her friends are waiting for her in the clinic. When Marnie is upset that Jessa is late to her own abortion, Hannah quips with "How could she ruin the beautiful abortion you threw?" But Marnie chides Hannah for taking it too lightly, saying, "it's about the most traumatic thing that could ever happen to a woman."

I thought the episode did a good job of showing how the different characters processed the implications of both having an abortion and becoming a mom, while struggling with just how big of a deal it really is for women. They voiced some of the concerns many young women today have when it comes to our choices about having kids. Like when Jessa said, "I don't like women telling other women what to do or how to do it or when to do it. Every time I have sex, it's my choice." While it's important for women to honestly open up about abortion, there is a fine line between getting the dialogue going and joking about serious issues, like when Sarah Silverman apologized last week for her abortion joke. Did you think Girls handled the abortion issue well?

Netflix
You: No, Madre Linda Isn't a Real Place in California, but It Does Have a Clever Meaning
by Njera Perkins 15 hours ago

Music
Adele Is Giving Us a TV Concert Special and an Oprah Interview in 1 Night — We Can't Wait!
by Naledi Ushe 20 hours ago