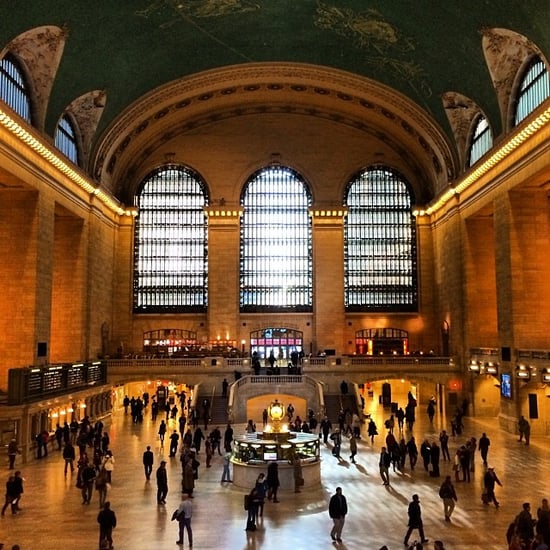 I read this touching Missed Connection on Reddit about a chance encountor between strangers at Grand Central Station (before Thanksgiving, no less) and was truly moved by the story of lost love. And as some Redditors, as they do, began to comment that Internet sluething could find the mystery woman in the posting, a few countered that maybe the past should stay in the past. One noted, "People change. Memories and our fondness for the past does not." Another responded, "Sometimes, especially when it comes to fleeting romances, we are truly left alone with the beautiful bits and pieces."

After all, for every once-in-a-lifetime happily ever after, there are thousands of stories of disappointment and crushed dreams. Is it better to always wonder "what if?" or to have a memory once held so close to your heart dissolve with the harsh light of reality? Read the moving Missed Connection below, and then share your thoughts or stories in the comments.

In the fall of 1973 I was studying as a freshman at NYU, and after failing to make my initial train home to Maine, I was rushing through Grand Central on the evening before Thanksgiving 1973 when I spotted you, emerging from one of the railways, with a look of utter confusion on your face. You had the blondest hair I had ever seen, and a plaid dress. I had never seen a plaid dress before.

I was, in those days, terribly shy, and if I am honest with myself, I've never shook that stubborn sense of timidity or loneliness in crowds. To this day, trying to explain the uncharacteristic courageousness that seized me in that moment, and inspired me to walk up to you and say "are you lost?" is almost completely beyond me.

You were studying at Olberlin, and on your way to spend Thanksgiving with your aunt in Jersey City. After explaining to you where you could get a bus, I asked, in spite of knowing it would mean sacrificing my last chance to spend the holiday with my family (and likely infuriate my over-protective mother), if you wanted to get a drink and you said yes.

We walked out into a rainy Manhattan street and ducked into the first (cheap) bar we saw, where I ordered us two bottles of beer. Now in my 50's, when with any luck a man might finally begin to acquire that elusive thing called wisdom, I know that there is nothing more exciting yet rare in life than making a true connection with someone. I have always been too sentimental for my own good, but in all honesty, I have never felt more at ease with anyone than I did laughing and talking to you that dimly lit midtown bar.

When I confessed that I purposefully missed my train to keep talking to you, you smiled slyly and said "well I guess it's only fair that I miss my bus." With no money for a cab, we walked to my Lower East Side dorm room, which was deserted aside from my German classmate Franklin, who kindly gave us a half-finished bottle of red wine.

We made love that night, and in the morning coached one another through shaky phone calls to our angry relatives back home. With the November cold turning the night's rain into a dreary wintery mix, we stayed in bed all day, sipping coffee and smoking cigarettes, discussing politics and philosophy. You told me you had never felt "so New York before."

That evening, you took a bus to Jersey City. A few weeks later I received a letter from California. You sent no return address, and I never saw you again.

I have been married twice since then - once divorced, and once widowed. I have had a successful career as an English professor, and am a proud father. My life has known its share of triumphs and heartaches, of love and loss. Against my better judgement, I haven't forgotten that day - and, at least once a year, while mowing the lawn, or reading a newspaper, the details come back to me.

Perhaps, if life's strange circumstances can permit it, we can have a second drink.